The kickoff for the United Parents slate at Biggie's Tuesday night was a rousing success. Of course you'll need to define success by how many Old Guard politicos you can surround a group of somewhat unsuspecting candidates with or is it an overfilled Trojan Horse?

Among those in attendance, it was a who's who of notable Old Guard stalwarts and former BoE trustees from the very bad old days when an audit uncovered so many transgressions by that school board the Old Guard cameraman had to lose the videotape in order to erase all the revelations.

Oh and Beth Mason showed up, late as usual, to round out the Old Guard reunion. Hey, one never knows when perjury or a civic "charity" office location may be needed for a campaign. Last year, she funded a series of filthy down and dirty political mailers to voters in the sixth ward against City Council President Jen Giattino in an attempt to inflict Carmelo Garcia on the entire Mile Square City as her going away present when her vast unpopularity forced her to the sidelines and re-election.

Most if not all of this illumination is captured in a video by the Hudson County View that once again found itself at the scene of the crime.


BoE trustee Peter Biancamano kicks off the proceedings with some very odd chatter about the superintendent who apparently needs himself and his group on the board as her ideas are at threat apparently by the existing board. Have you heard that anywhere before? No, but this is politics and weak arguments are what they are. More odd, at the 25 second mark of the video, Biancamano references the candidates are needed to implement the superintendent's vision and points haphazardly behind himself not to the candidates but to the Old Guard ringleaders: Councilman Michael Russo and Joe Branco.

BoE candidate Jessica Nelson, a realtor who sends her girls to Hoboken Charter then appears in the video. She says she wants to be on the board because too many parents express a desire to her to move to Summit and Chatham due to the Hoboken schools. So the Summit and Chatham lifestyle is an exact match to Hoboken and the only difference is schools forcing their move to the burbs? Nice lifestyle choice if you can afford some of the toniest towns in New Jersey. Wasn't there another Old Guard realtor candidate who actually wanted to be on the school district board to see his business model of moving families to the burbs thrive? Well, we've come full circle.

If Jessica Nelson is so concerned with Mile Square City school improvement why isn't she seeking to be on the board of the school where her children actually attend: Hoboken Charter? Of this, we hear no explanation but Hoboken voters are no doubt filled with dread about losing its population to wealthy townships with backyards.

For those who care about the Hoboken school district, this is a painful reminder of the 2012 Move Forward Nazi Truck campaign that openly (and loudly) urged that charter school parents in Hoboken be given access to the resources from the wider school district. It was a cynical and craven reverse Robin Hood template. Have the rich kids take the stuff of the middle and lower income kids.

Parents United candidate Francis "Chipper" Benway follows. He's a lifelong Hoboken resident and teacher in Union City. He's already gone "off message" and voiced concern about the funding battle between the charter schools and wider school district. When push comes to shove who does he stand with on the funding issue? As a teacher, Benway knows the drill but the question will arise who does he stand with and represent as a Hoboken school district board member?

Last, Jennifer Rossini is a Wallace parent with a child in the special needs program. She has further interest in the program's expansion and further support of children like hers. Does she know the record of the people surrounding her on taking resources out of the classroom? Perhaps not.

In the end you have a BoE slate that consists of a Stick Romano Trojan Horse, a local teacher who should or must know better and a special needs parent who likely doesn't that her hopes directly conflict with the Old Guard philosophy the BoE is a jobs program with a heaping of steak dinners and mobile phones for their esteemed chosen.

From the KPMG audit on the darksider led Hoboken BoE: 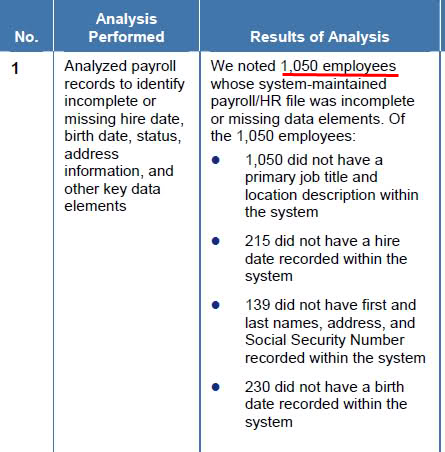 With this kind of legendary abuse of the public trust and schools, are these same Old Guard BoE leaders the type you want pulling the puppet strings over your kids education?

Which all goes to say, in the end this BoE race like years past will be based on Old Guard tribalism, cynicism and a preview to the next mayoral election in 2017.

Don't blink because in a flash, the disaster can be upon you faster than Hurricane Matthew.

For the original story at the scene of the crime, please see the Hudson County View.