The endorsement appeared on the candidate's Facebook page this afternoon.

The clamp on the Democratic nomination for NJ governor is heralded as former US Ambassador to Germany, Phil Murphy has all but KO-ed his party opposition north and south.

Mayor Zimmer is hosting the candidate in Hoboken tonight and sent out this announcement earlier: 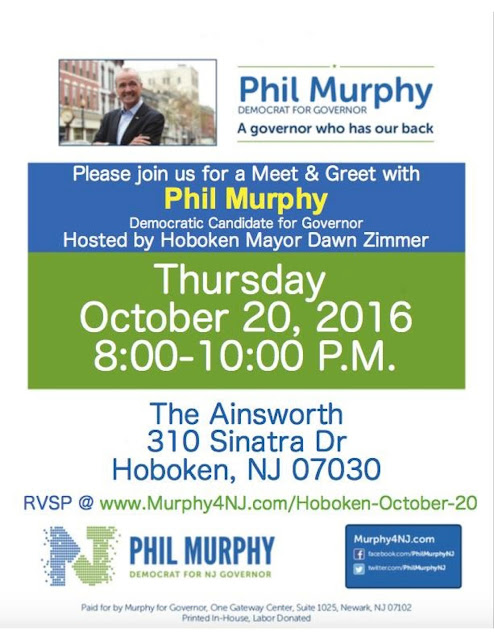 The BoE forum is slated earlier at the Elks.
Busy night.

Debates over and questions loom for the Republic?

MSV offers snapshot analysis on the last of the presidential debates

Benjamin Franklin, a Founding Father or as the politically correct teach in schools these days, an old white guy, put it appropriately when asked about the future of the rebelling colonies.

To the question, "Well, Doctor, what have we got - a Republic or a Monarchy?"
In reply Franklin quipped, "A Republic, if you can keep it."

On the heels of undercover videos showing Democratic political operatives admitting to inducing violence in multiple US cities and widespread election fraud he offered a short answer saying "we'll see."

The media not so secretly in the tank for their candidate Clinton, have taken that open question and tried to say it's a threat to a peaceful transition of government. What it says to the American people who have been belted in the jaw with an education of truths in the last year about the government weaponizing its institutions against them is there will be no concession to speculation in the face of a questionable fair and free election, election fraud and campaign frauds of all kinds, re: rigging the system.

The media forgetting recent presidential history will develop amnesia on Al Gore's challenge in 2000 and raise their collective heads and howl like banshees.

After the debate, Hillary Clinton appeared briefly for a post-debate spin-fest. Behind her on the left is her campaign manager Robby Mook and on the right, her campaign chair John Podesta.

In the last week or so, almost 20,000 of Podesta's emails via WikiLeaks have fueled an inside look on the thoughts on this Republic and what the candidate thinks of Americans.

It isn't pretty. One of those emails, the second in both recent debates came to the fore asking Hillary Clinton what she had to add about her "dream" of "Open Borders?"

Everyone knows the term and its actual meaning but Clinton offered a bizarre answer saying it referred to energy.

It got worse and not just for flippantly mentioning classified information on US nuclear response time.

Trump would later bring up the revelations alleging violence paid for by the DNC, her campaign and point to the series of attacks on Americans using their First Amendment rights to attend political events. It turns out that two political operatives (one married to a Congresswoman) have also made hundreds of visits to the White House since 2009.

Call it your typical Left wing community organizing. Bashing heads of average citizens where attacking police is par for the course. How many police have been shot and killed this year?

Pressed on this with Trump calling out her backing violence against Americans, Hillary Clinton had no answer whatsoever.

To a question about pay to play and her Clinton Foundation discovered taking tens of millions from ISIS funders Saudi Arabia and Qatar, the same: no answer.


Next month Americans will go to the polls. As Franklin said, "a Republic if you can keep it."

The undercover video that started it all. The author? He's a young blogger who recruited people to go inside and look in the belly of the beast. Eye opening.