In a well-attended ceremony outside Hoboken City Hall Friday afternoon, an inaugural celebration on the American transfer of power with the swearing in of the 45th President Donald Trump was memorialized by Hoboken Mayor Dawn Zimmer and other local officials.

Mayor Zimmer said the inaugural celebration was appropriate as "everyone is shaped by change coming to America" demanded by American voters last November with the majority voting against Hillary Clinton. "This was a change election, one tens of millions of Americans sought. Many said change would arrive in 2008 but Americans last November voted for change versus the offered transformation." 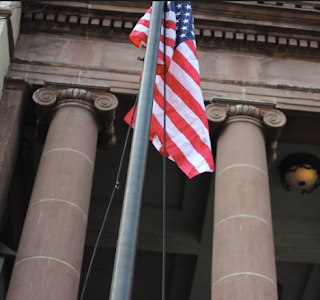 After leading a crowd of approximately 200 in the Pledge of Allegiance, Mayor Zimmer urged the crowd join her with the Hoboken High School Marching Band in singing, "God Bless America."

The following are excerpts from Mayor Zimmer's prepared remarks.

On our shared American heritage and political violence:
"We are first and foremost, Americans, and as citizens of this nation, we must respect the voices of our fellow Americans who delivered a clear message last November under our Constitutional electoral guidelines. Donald Trump earned over 300 electoral votes winning 30 of 50 states and 3,084 counties out of 3,141 nationwide. This electoral victory signals new leadership and a new path for our nation and we must support our shared American values as one nation and one people.

As we celebrated MLK Day earlier this week, we must follow in the echo of his footsteps. Violence, bitterness and antipathy as a counterpoint to free and fair elections must never be the path. As elected officials who've sworn an oath to uphold the Constitution, we must never be silent when political violence is tacitly endorsed and erupts as last night in Washington at the Deploraball. Americans demand respect for our shared values, national heritage and the vote so we move forward as one nation. Forward!"

Global Warming
Speaking to an issue of frequent interest in the past, the mayor added, "While some of us feel threatened by climate change, the United States is not the problem globally as China and India are the nations impacting carbon emissions far outpacing the US and the rest of the world. We must redouble our efforts there even as America is moving decisively toward energy independence with clean coal and greater shale resources, an objective many did not foresee or seek in our lifetime. Progressive ideals necessitate as many of us as possible move to China and India and remain there as long as possible for this dire fight, whether as legal migrants or undocumented, voting residents. Hoboken will begin a GoFundMe account raising funds for Mile Square City residents for one way travel to those Asian destinations to help make this dream a reality."

On government financial responsibility:
"America has reached a financial precipice doubling the national debt from $10 trillion to over $20 trillion in only the last eight years. In Hoboken, we've made the tough decisions to keep spending under control while maintaining strong fiscal management and a sound future for our children and those who follow us. We've been able to successfully keep taxes down while other government entities locally are far less interested in exercising the will to achieve those results. While restraining spending, Hoboken continues to lead the entire state of New Jersey with the most per capita subsidized housing in all of the Garden State. Our taxpayers are silently absorbing new tax burdens seeing new affordable units being built in Hoboken. However, the federal government must follow with responsible financial action and accountability before we become a basket case like failed nation states such as Venezuela."

Infrastructure and Corruption:
President Trump spoke today reaffirming the need for Americans be served first, not political interests and seeks to address its infrastructure and has pointed to our inner cities deserving revitalization and investment. He's promised to act definitively draining the swamp as an essential component to that path. In Hoboken, we've rooted out systematic practices rooted in corruption and correspondingly invested in infrastructure as our path to success. Citizens demand government responsiveness and we must deliver on it both locally and nationally."

Hail to the Chief:
The mayor concluded her remarks saluting the incoming national leadership offering her full support and cooperation saying, "We all wish President Trump and our new government leaders well in the coming days and years as we come together in national unity and seek to work together while we remember so many Americans in recent years have been left behind. As President Trump has stated on many occasions, so many citizens of our nation have been forgotten. But they will be not be forgotten nor forsaken any longer. We must work together in unity to attend to Americans' dire needs, whether it's our veterans we hold dear or the growing numbers of the homeless and inner city children who dream of a future and deserve a great education. Together we must stand united as one nation adhering, respecting and upholding all our laws: local, state and federal. I've sent my personal congratulations to President Trump and Vice President Pence from all of us in Hoboken."

The mayor concluded her remarks saying, "Love trumps hate. Let us unite, offer prayers to the Lord and extend love in our hearts to all Americans in these United States, one nation, under God and Make America Great Again!!" 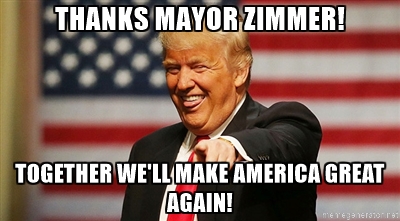 In a rare public appearance, Mile Square smear merchant Pervy Klaassen was seen attending the inaugural celebration outside City Hall and offered some surprising comments. "I never expected Mayor Zimmer would be gracious and offer such a powerful message of unity to all Americans today. So I'll give her credit and besides, Bet Mazin isn't paying me anymore so I don't give a shit. I hate Hoboken and all the assholes who live here. I don't."

Asked to explain what he meant, Pervy mumbled, "I don't live in this shithole" and walked away with his arm extended in the air with his middle finger pointed to the sky at no one or everyone in attendance.

Talking Ed Note: In a move repeatedly predicted by the Hudson Reporter, Mayor Zimmer announced she would be resigning as mayor come July and not seek a third term as Hoboken mayor. She's moving to China as part of a group ACPCCF sponsored by NJ gubernatorial candidate Phil Murphy, "Americans for a ChiCom Progressive Climate Change Free Future."

An official announcement will be made Monday.

This article is satire
Posted by SmartyJones at Friday, January 20, 2017