MSV obtained and is publishing the complete civil complaint filed by Hoboken politico Perry Belfiore against the City of Hoboken and Councilman Ravi Bhalla last fall.

Among the issues in the civil complaint: Perry Belfiore alleges violation of his First Amendment rights, being "thrown to the ground" by members of the Hoboken Police Department and seeks unknown monetary damages and cost of attorney fees in a jury trial.

In 2012, Kleinman was one attorney representing Beth Mason and her Old Guard council allies in litigation ejecting Councilman Jim Doyle in his temporary appointment after Councilwoman Carol Marsh resigned due to family reasons.

The action initially failed in Hudson Superior Court and in a rebuke by Assignment Judge Peter Bariso's legal decision, the council vote was ordered retaken due to the "gamesmanship" of Beth Mason and Michael Russo avoiding their paid council responsibilities to attend and vote on the temporary appointment. 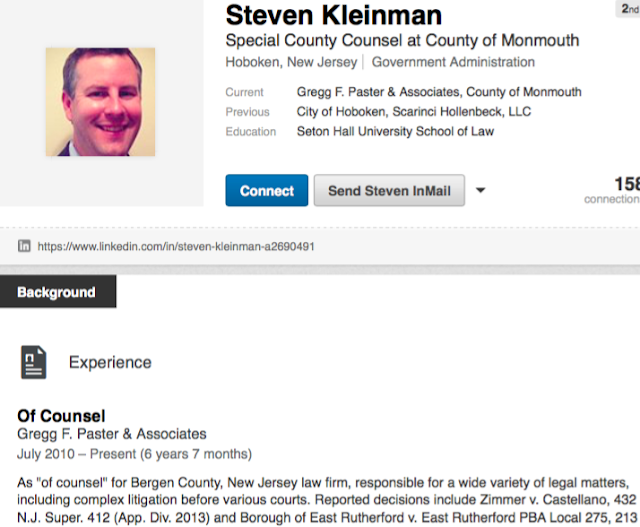 The law firm Greg F. Paster and Associates was unavailable this early morning for further comment.
The City of Hoboken does not comment as a matter of policy on active litigation.

Talking Ed Note: The decried "gamesmanship" was staged to avoid a legally binding and tie-breaking vote by Mayor Zimmer. An Appellate Court ruling would overturn the reinstatement of Jim Doyle to the council. No appeal to the NJ Supreme Court occurred as the clock ran out when Hoboken voters took matters into their own hands and elected Doyle to a full four year term in 2013. Mayor Zimmer led a sweep crushing Beth Mason and her Old Guard allies bringing all three of her at-large council candidates with her.

Related: Perry Belfiore has a long history of antagonism with Councilman Ravi Bhalla. An ethics complaint filed back in 2014 has been batted around gaining little traction before being tossed and then reinstated. It generated an initial ruling for a $100 fine on a designated minor technical matter.

Belfiore in a phone interview last week however says there was no quorum on a final decision bringing the matter back for further re-evaluation.
Posted by SmartyJones at Wednesday, February 01, 2017