Battle of the fundraisers, round two

Last month, council members Ravi Bhalla and Mike DeFusco held opposing fundraisers on the same evening. It was more accidental than incidental but the overtones were none too apparent. 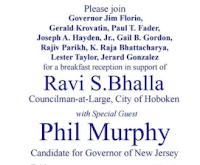 Councilman Mike DeFusco holds a "Pride Night Out" fundraiser this evening at the Dubliner. It's two consecutive months of fundraising for the first term councilman who officially points to his reelection prospects in 2020. Everyone else is pointing to the monthly fundraisers as an indication to marshall resources and unseat Mayor Dawn Zimmer this November for the mayor's office.

The fundraising push on each side comes with an eye on a March 31st deadline. In the middle of April, NJ ELEC reports will be submitted showing results for various campaign committees statewide. There'll be more than a little interest in not only the fundraising totals and who ponied up but the actual committees where the money is heading.

Will Mike DeFusco unveil a mayoral committee making a run for mayor official? 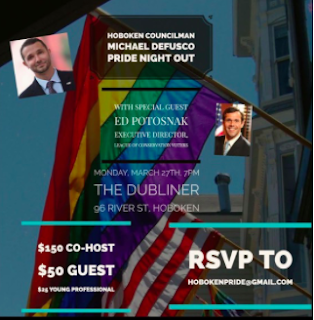 If DeFusco is a candidate for mayor, interest in who will be on his council-at-large ticket follows. Two names seeing some speculation are former councilman Tony Soares and Cheryl Fallick. Both were seen at the Cadillac Cantina event for DeFusco last month.

The rest of this story is MSV Premium content and will be sent out to members later today.