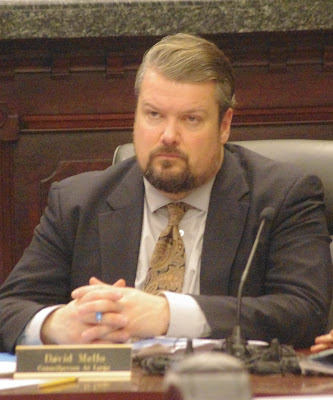 Councilman Dave Mello in a wide-ranging phone interview last night responded to a rumor published on Grafix Avenger he was switching to a Councilman Mike DeFusco council ticket deeming it "100% false."

There's rampant speculation DeFusco is preparing a run for mayor this November and could announce as soon as next week or early spring. Three at-large council seats are up this fall and any mayoral candidate would likely have three running mates.

On reading the report published late yesterday, Mello offered a rebuttal citing another inquiry earlier in the day from the Hudson Reporter. "When I got home from work, I checked my council email for the first time and Al Sullivan had contacted me about the same rumor, the same lie. I quickly responded, a short response. He concluded with "It's a total lie.''

The two term councilman pointed to the unnamed source(s) pitching their fare saying, "I told him (Sullivan by email) his sources are totally wrong and he should get new ones.

Addressing the rampant speculation swimming around the first term councilman Mike DeFusco, he stated flatly of any potential mayoral run, "It's a stupid and bad choice for Mike DeFusco to run or even the idea of putting me on that ticket. Which I shouldn't be as I was never asked such a thing."

Mello offered several reasons for his thinking. "First, Mayor Zimmer has been doing a great job for Hoboken. Mike (DeFusco) is too inexperienced to run for mayor. Going from serving in public office in the city of Hoboken, to take on that responsibility at this time is a mistake."

Pointing to a career track, he said of DeFusco, "It seems like he has a good career in the world of television. If you leave that career for any length of time, it's hard to get back in at the same level. That would be pretty foolish."

Then there were some words on the future where Mello pointed to some positives on his council colleague. "Mike has potential for the future, years down the line, five years at least. If Dawn Zimmer moves on, I'm as a resident in Hoboken who's lived here for 20 years would like to see the best pool of people to succeed her. Mike could potentially be in that mix. To run this year would damage him tremendously."

In addressing the speculation swirling around DeFusco, he added, "Why would I consider running with someone if he does make that decision? I have not received any direct indication that will happen."

Looking ahead Mello offered his view to the future. " No one has ever approached me about that (a DeFusco ticket). I want to run and intend to run on Mayor Zimmer's ticket assuming she will wish I run with her again. I have no reason to think that assumption is wrong. I believe she'll have a council at-large ticket and I'll be with her again." 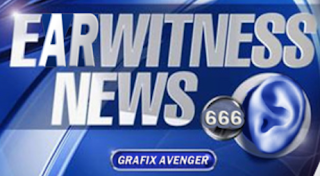 On the GA rumor Mello said, "It's disappointing. Grafix Avenger writes a post; it's a 100% lie. She doesn't have the decency, the moral fiber to try and contact me before publishing. She's someone who treated me like friends before but not to give me that courtesy is very hurtful. It's incredibly irresponsible. I think she should reassess herself."

In an email replying to Mello, Grafix Avenger wrote, "Well, I apologized to Dave. But, he should "reassess" his language, because a "lie" is a knowingly false statement. The column was not a "knowingly false" statement -- it was information from a 40-year Hudson County political operative with deep ties in Hoboken, into the DeFusco 'brain trust,' whose information has been reliable in the past. Note, Earwitness is a column where folks can, under the protection of anonymity, offers tips about public, political officials - which I vet as much as possible. Never heard a complaint in six years. But, Dave is right, I should have called him first."

Councilman Mello also currently serves as a commissioner on the Hoboken Housing Authority and is one of several current members being sued personally and as a member on the authority by its former Executive Director, Carmelo Garcia. A counter suit was filed by the HHA against Garcia. Those civil actions are ongoing.

Former councilman Tony Soares mentioned in the GA report was contacted for this story and declined comment.
Posted by SmartyJones at Thursday, March 09, 2017