The pending entry of Freeholder Anthony "Stick" Romano is causing major agita in the Mike DeFusco for mayor camp.

Friday night MSV was alerted to a claim of 75K raised at the prior night's fundraiser and the promise of more campaign loot to come.

There's been a lot said of the mother's milk of campaigns and most often it's a prognosticator of election success. This however hasn't been true in Hoboken since the rise of the Hoboken Reform Movement in 2009.

It's equally evident last November when $1.2 billion far outpaced the main opposition funding but Hillary Clinton went down in flames. Money just ain't what it used to be versus the electorate.

There's a lot more to delineate here on the local disruption of the election cycle. 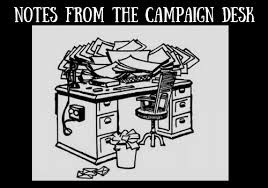 The most significant impact of the "exploratory committee" or pending announcement of Freeholder Anthony "Stick" Romano tossing a hat into the ring is it further stifles the DeFusco campaign and his inner circle said to include Councilman Ruben Ramos, developer Frank "Pupie" Raia, anti-Zimmer politico Perry Belfiore and nominally Councilman Michael Russo who is already eyeing a mayoral run of his own in four years. Some also say sue-happy Carmelo Garcia who appeared at a DeFusco fundraiser in February is also backing Councilman DeFusco's bid for mayor.

It's Old Guard city and gnashing of teeth time. They've seen this play in 2013 and don't like the adaptation for 2017. Four years ago, the lamenting cries of the Old Guard to the Hudson Reporter led to years of wailing the Tim Occhipinti for mayor effort was a cynically crafted late entry to stop Ruben Ramos from becoming mayor by splitting Old Hoboken voters and leaving the Old Guard adrift.

The analysis was fatally flawed however and self-serving. Raia sought to be a power broker and saw his best chance at doing so by becoming the fifth vote on a split nine member council. He was prepared to make a council run alone but was convinced to join the nefarious Beth Mason in running an entire ticket with then councilman Occhipinti atop.

Antagonisms between Raia and the Ruben Ramos campaign encouraged him to go full throttle but he was motivated to propel himself not the entire ticket. The strategy failed with the Raia-Mason ticket receiving in the vicinity of 15% of the vote. Among council candidates, Raia came in seventh and was thereafter referred to as "Mr. Seven."

Romano is not motivated by any such splitter strategy. His primary motivation is to kick Old Guard acolytes in the teeth for months of threats, bullying and orders to do their bidding. One rumored meeting he held with DeFusco last winter reportedly had him quietly fuming and bidding his time as the one year councilman demanded he endorse him for mayor or else.

Or else? According to one reliable source, DeFusco threatened Romano saying if he refused to stay out of the mayoral race and endorse him for mayor he would lose any re-election bid for freeholder, courtesy of the kid.

To say this rankled Romano, a former Hoboken police captain and senior county elected official is to understate the matter. With Stick heading to easy re-election for freeholder against nominal Republican opposition this November, he's begun entertaining a double ticket whammy. Why not run for freeholder and Hoboken mayor at the same time? Approaching 4,000 votes in the spring, he can easily increase it in November and make a serious bid for mayor at the same time.

Mayor Dawn Zimmer won in 2013 with about 6500 votes. With Old Hoboken coalescing around its favorite son in Romano, DeFusco becomes the after thought, campaign cash notwithstanding.


The rest of this story is MSV Premium and was sent to members today.
If you didn't receive yours, please contact smartyones@me.com

To join and have Hoboken and its 2017 election coverage sent right to your email inbox sign up:
paypal.me/RomanBrice/75
Posted by SmartyJones at Monday, June 19, 2017