Earlier this morning, the political violence incited over months and celebrated publicly by many led to a shooting where a member of the Congressional Republican leadership, Steve Scalise was wounded with others at a baseball field in Alexandria outside Washington, DC. 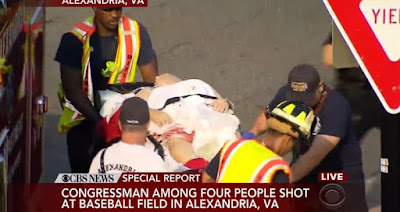 Reports are fluid on the apprehension of a shooter who fired dozens of rounds but who saw return fire stop what Senator Rand Paul, an eyewitness to the event reportedly said in one interview "would have been a massacre."

As part of the Congressional leadership, Washington DC police are assigned and were present. DC police were reportedly wounded as they charged toward the shooter.

Media reports say the shooter is from Illinois, James T. Hodgkinson as comments are appearing on his Facebook page for the moment:


Congressman Scalise is reportedly in critical condition. Video footage taken at the time of the attacks is below. Warning: foul language and many gun shots.