The following is public comment by former Hoboken Housing Authority Chair Dana Wefer. She was instrumental in uncovering massive malfeasance in the HHA, seeking a national solution in a replacement and helping to turn around the agency after the hole left by an autocratic political despot with political ambition and power the focus.


Last Thursday was my final Hoboken Housing Authority meeting. For those of you who follow Hoboken politics, you're probably familiar with the very public battle I had with my former assemblyman and former Executive Director of the housing authority.

But that public battle was just three months of the three years I was chair. In August 2014, I was able to walk into the housing authority for the first time with actual authority. I got my first glimpse of the financial and physical state the Hoboken Housing Authority was in, and it was awful. The rebuilding that we have been working on for the past three years is the more interesting and more important aspect of my tenure there.

David Dening, who is now chair, and LaTrenda Ross, who is vice chair are the leadership team on the board, and I am 100% confident that they are the best the HHA could get. Marc Recko, the executive director, is kind, principled, transparent, dedicated to the preservation of public housing, experienced and capable.

Serving with my fellow board members, Councilman At-Large David Mello, Judith Lee Burrell, James Sanford, Jean Rodriguez, and Hovie Forman, has been an incredible experience. They have all demonstrated that they have the courage and principles to stand up and do the right thing, even when the easiest thing to do is to walk away. They encapsulate the word "public servant," and it's been a privilege to work alongside them. Jeannie and I started off on rough footing, but she was an essential part of the rebuilding and ensuring that the HHA got a permanent executive director who is experienced.

The HHA staff. There are people who I know prefer not to be in the spotlight, so I will not name them, but let me just say, they are the reason we have Mark. They were a support system to the board, and they have gone above and beyond at every turn. Thank you.

Finally, the residents, the reason the HHA exists. It has been so wonderful getting to know all of you. Your dedication to the HHA exemplifies what the word "community" means. The biggest healing that needed to be done was between the residents and the authority. The chasm that needed to be bridged was wide, but I think we did it. Knowing that the residents, hha board, and hha itself are all working towards the same goals of making the HHA safe, clean, and a decent place to live, allows cooperation to thrive.

In particular, Barbara Reyes, Sandra Smith, Michele Lessane, and Arlette Braxton, you come to every meeting, rain or shine, with ideas and a willingness to put in the work to bring them to fruition. I admire you and have been inspired by your dedication.

Serving as chair of the HHA for three years, leading it from extremely troubled and putting it on a path to success has been my greatest accomplishment in life, so far. The lessons I have learned are invaluable, and I intend to share them through video.


Thank you all for allowing me to be a part of something bigger than myself. 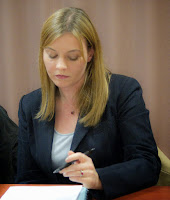 Talking Ed Note: A few words on Dana Wefer who made a major impact on this community in recent years. First, she has an essential positive spirit seeking cooperation with others to do good. She became active in Hoboken's Reform Movement before she passed the baton to her fellow board members to take their next steps together as she and her family are looking to a new home outside Hoboken tending to the needs of her growing family.

This Horse saw the woman in action, in crisis and she was battle tested in taking on a political fiefdom with the scourges of Hoboken aligned in support. She was always resolute in her objectives but it wasn't about her; she was trying to do what she felt was right for the residents.

Dana would seek elected office in 2015 for Hoboken City Council but she stayed honorable in how she conducted the business of the people in the Hoboken Housing Authority. In the end, even there, she won over her most skeptical critics.

Dana feels the biggest impact on the HHA in her tenure was having Marc Recko, identified in a nationwide search step in to become Executive Director and the removal of the HHA itself as a political pawn in Hoboken elections.This election season however will see the HHA targeted perhaps like never before.

Today however, I wish to say how much I respect Dana's community service and my admiration in how she performed under such trying conditions. Her smile and lighthearted nature lights up any room. I wish her and her family the best and will miss her terribly. She's been one of the great people I've met in the almost eight years of reporting here at MSV.
Posted by SmartyJones at Wednesday, July 19, 2017