Official release: Office of the Mayor 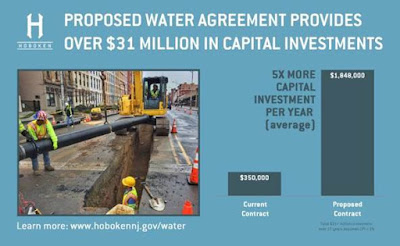 Suez Water will be making a presentation to the City Council on leak detection technology that could prevent major water main breaks by detecting leaks early on. The proposed $2.5 million investment in the technology is part of the proposed amended agreement with Suez Water which includes a total of $31 million in infrastructure investments.

The Council agenda will also include a resolution to adopt the proposed agreement as well as an ordinance to mandate that funds received through the agreement be dedicated towards water main system improvements.

“Given that the proposed agreement would provide $31 million for urgently needed infrastructure upgrades, I ask the City Council take a vote on this issue at their meeting next week so that my Administration can move ahead accordingly,” said Mayor Dawn Zimmer.  “Under the existing agreement, the City - and by extension every taxpayer – is responsible for excess repair and bulk water costs. Ultimately, that means residents are footing the bill for car washes or laundromats that use millions of gallons of water, while the proposed agreement would make ratepayers responsible for their own water usage.”

The proposed agreement was introduced to the City Council on July 11th, presented and discussed at City council and subcommittee meetings, and the following provides the second set of responses to Council members’ questions regarding the proposed agreement: www.hobokennj.gov/docs/Suez-Agreement-QA.pdf.

Mayor's Zimmer's request to the City Council is Dead-on-Arrival.

MSV sources confirm Councilman Ravi Bhalla who was challenged for a potential conflict by Councilman Mike DeFusco at the earlier council meeting where a Suez presentation was made will not be able to participate in the discussion and vote.

Corporation Counsel at the earlier counsel meeting said there would be no legal analysis on a conflict of interest on the matter of Suez and Councilman Ravi Bhalla's participation "on the fly" during the meeting. Apparently, some legal analysis by members not conflicted in the legal matter, possibly an outside State agency provided guidance to the City of Hoboken.

The City Council would consider the Suez contract before eight participating members. It's highly unlikely there are five members willing to entertain a vote approving the mayor's request next Wednesday.

It's far more likely a discussion will be held and/or no vote contemplated or a motion to table.

Whatever action the City Council chooses, Councilman Ravi Bhalla will not be participating.

Posted by SmartyJones at Friday, September 01, 2017