The City Clerk's Office will be active as last minute petition filings for both mayor and council candidacies are submitted with maybe a surprise in store with one if not both.

Election Day is two months away and the preliminaries are over. The plotting, scheming and downright nasty fabricating already started over the weekend with false accusations at Sybil's Cave. Censorship remedied the falsity or did it?

Tomorrow the City Council will hold its first September meeting and it promises to be conflict heavy. Last month, Councilman Mike DeFusco alleged his colleague and mayoral opponent Councilman Ravi Bhalla was conflicted to participate on updating the Suez Water contract. Denials and suggestions by Councilman Bhalla said the public discussion was better off private or would that be a back room discussion too? Shades of transparency or the lack thereof with the mayor's attempted baton toss last June.

The alleged conflict didn't make it past or through the Corporation Counsel Office. Donations to candidates to keep a City Hall job preclude such conflicts for clearance via legal opinion. Some conflicts are undeniable and the inevitable recusal followed to no surprise of any lawyer in the Mile Square City.

Over the weekend, comments popped up on the Hudson County View story with rumors swirling the administration buried millions in an unaccounted water bill and is attempting to bury it permanently with a new contract where more questions than answers are available. As MSV determined last week, the proposed Suez water contract is DOA with at best one vote to approve heading into tomorrow.

None of this has anything remotely to do with sources alleging the Condon Affair is not over. The 2010 allegation of an ethics charge turned topsy turvy at the state when Perry Belfiore originally filed it against Councilman Bhalla. Sources allege the NJ Local Finance Board is taking up the matter again after an administrative judge was overturned and sent Sybil's Cave into much wailing and gnashing of teeth over the weekend attacking the messenger. (This may require a refill of holy water.)

Did Paul Revere's horse suffer such tragic attacks? One can only imagine if there was a Sybil's Cave for the redcoats back in the day. More on the lunacy there at the jump featuring the requirement for "boundaries" against the truth surfacing and all kinds of stupid personal attacks.

The distasteful and false accusations of angry liars for those not faint of heart at the jump.


Some people just couldn't wait until after the Labor Day Holiday to ring in the full blown Hoboken candidate season. Sadly, over at Sybil's Cave false accusations are the order of the day and once again accusing MSV incorrectly of lying.

Them's fighting words! So, let's call out the lies in the full spirit of the First Amendment and transparency. You know, in the spirit of fairness because a Horse did warn the cowards the hoof would kick them in the butt or their collective transgendered neutered eunuch selves.

Here's Nancy's writing a screed of lies as fact. She did not call MSV to inquire on any of her "facts" nor did she send any question on any of this in writing. She just went ahead and made it up and fell into a screed of lying. Why? Because the shadow told her?

MSV took on the lies and fired back with the truth! 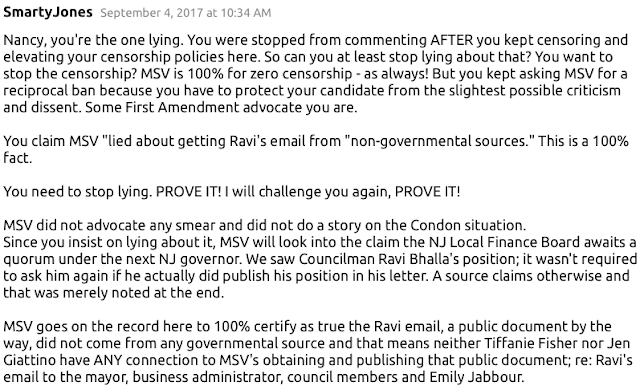 MSV as written in the original exclusive story on Friday stated the Ravi Bhalla email, a public document was obtained from non-governmental sources. It did not come from the Giattino campaign.

The false accusations are bitter grapes of a fanatical supporter for a campaign and a tell.

Posted by SmartyJones at Tuesday, September 05, 2017