This just in on Saturday afternoon as the hot and now often ugly Hoboken mayoral race approaches election day on Tuesday.

A competing campaign source was overheard saying, "Jen Giattino is surging" in the last two weeks in its campaign polling. The information comes from a source of high reliability.


The admission explains the ugly attacks popping up on multiple fronts against the popular City Council President. She's been the target of highly hyper partisan mailers from the Bhalla campaign and some rather nebulous assertions by Mayor Dawn Zimmer.

Apparently, none of the negative hit jobs are an accident.

Sources within Team Giattino admit the campaign is feeling it out on the streets. Their candidate, considered the best among the four majors is buoyed by the reception she's receiving from people all across Hoboken.

The warm reception and admission with even volunteer support from Old Hoboken, newcomers, seniors and everyone in-between shows the success of a campaign candidate with certified cross-over appeal.

It also explains the ugly sexist attacks being piled on by the denizens of Sybil's Cave, fanatical backers of the Bhalla campaign who will do and say just about anything to stop the Giattino surge. The lies there are coming fast and furious with the latest propaganda trying to distort votes for Giattino as helpful to others (but of course not Ravi Bhalla).

The election scheduled for Tuesday is expected to be contentious with an ugly midnight flyer adapted from a DeFusco mailer calling Ravi Bhalla a terrorist. The community response has been strong and universal condemning the flyer from all corners. 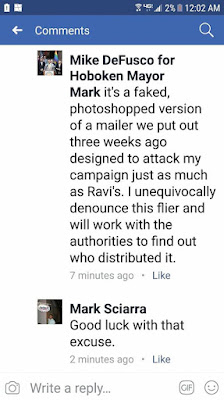 Talking Ed Note: Of some interest, one defender of Mike DeFusco on Facebook today is former Hoboken councilman Chris Campos. The former resident is facing sentencing for fraud after a federal trial earlier this year.

Campos rightfully called the flyer hit on Bhalla "horrible." He offered additional comments defending Mike DeFusco saying "I cannot believe Mike would do this... Just not his style." He also added, "There was another piece that came out that reeked of old Hoboken political trickery" a reference to recent mailers attacking Defusco by the Bhalla loving Super PAC, Stronger Together.

Campos posted the defense by Mike DeFusco on his behalf and found some resistance. (See left) In another comment on the same Facebook thread, he wrote, "it was NOT DEFUSCO!"

Recently, MSV made reference to Campos being part of a group backing Mike DeFusco for mayor and was called a liar by a Bhalla campaign zombie. The zombie took a hoof across the chin in the exchange and hasn't shown his lying mug here since.

Remind this Horse if there's a zombie sighting ahead to quickly put a hoof up its ass. Because a zombie is dumb and dense and can use a remedy for the stupid. How's that backroom deal looking now?

Posted by SmartyJones at Saturday, November 04, 2017