The details are not altogether clear but a Hudson County jury has awarded the buildings at Maxwell Place approximately $5,000,000 in a civil lawsuit for the eminent domain action taken to have the North Hudson Sewerage Authority install the Mile Square City's second water pump.

For the moment, it's not clear if the award is against the City of Hoboken, the North Hudson Sewerage Authority or both.*

MSV reported first the second Hoboken water pump has been a resounding success in West Hoboken in the area of Shoprite. But now the cost for the implementation may skyrocket as legal action by Maxwell Place which opposed the pump's nondescript installation underground between its buildings has seen a lofty sum in a jury award for:

A letter is reportedly circulating among Maxwell Place residents referencing the huge sum awarded earlier this week in a jury trial.

No immediate comment is available from City Hall or the North Hudson Sewerage Authority at the moment. Expect a follow-up story on this breaking MSV exclusive.

Update: The letter circulating among Maxwell Place residents called the award of $5,058,900, "fair and just compensation." 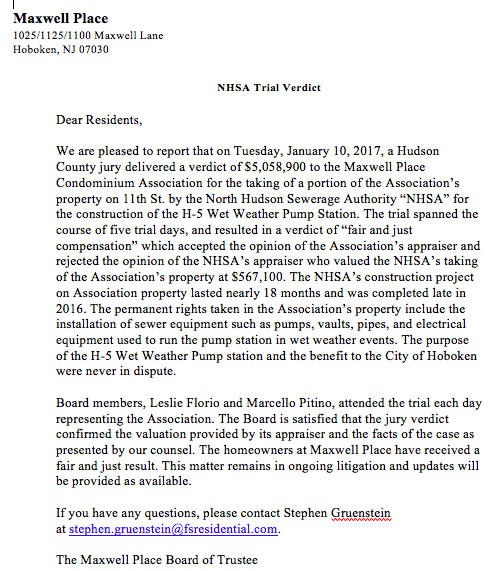 Expect a follow-up story on this breaking MSV exclusive. This story is breaking...