It's three days before the inauguration of the 45th President of the United States and the frothing, the foaming and propaganda by the Deep State and much of its machinery, subsidiary lemmings, dupes and assorted cranks continues apace.

One big question unasked by its media militants concerns Hillary Clinton who may be in dire need of a presidential pardon even more than originally thought.

In a release garnering next to no media attention a week ago on a Sunday, during the NY Giants - Green Bay game the FBI released several hundred emails never seen between the former Secretary of State and among others, loyal political operative Sydney Blumenthal.

The newest email batch is the fifth release of Hillary Clinton's emails by the Feds. (Seen below with government redactions withholding classified details.)


Blumenthal, a well known former journalist and hatchet man for the Clintons looked to make major financial gains in Libya after its government overthrow and being blocked from getting a job at the State Department. Among those Clinton emails, scores clearly delineated as classified. Access to such information is restricted and loyal political operatives without clearance are not among those permitted to receive them. No yoga or family related wedding emails appear anywhere in the batch.

Worse, it's known that in addition to sensitive US intelligence being mishandled by Clinton herself, the email address of Blumenthal was also compromised meaning that the emails very likely fell into the hands of foreign intel agencies. The FBI action on a Sunday night leading so soon to the Inauguration this Friday appears to have been made to preclude or discourage Hillary Clinton's name from showing up on a list of those pardoned in the coming days.

Penalties for mishandling classified information are severe but the charges escalate dramatically when the crime of espionage is added when the data falls into enemy hands. A former NJ judge says espionage is on the table among serious potential charges.

Coming on the heels of several failed political operations to undo the election results, a fabricated document about the pending President Trump called a "dossier" to make it sound credible originally commissioned to a UK dirty tricks and former intel agent by Jeb Bush's people and then funded by Hillary Clinton people has recently gained national attention.

While the document circulated for months with little notice other than a left wing story in Mother Jones, most saw the obvious telltale signs of a hit job with obvious headings not used in US government agencies and dismissed it as wishful thinking.

Laughable on its face, the document was referenced on CNN who linked their online story to the actual document on the NBC backed website Buzzfeed as part of a US intel briefing. A pending president has clashed with the political heads of US intelligence pointing to their role in the hatchet job and smears embraced by rabid partisans as newsworthy.

Over the weekend, Bob Woodward slammed the document recounting a bizarre story of Russian hookers hired to pee on a bed by Donald Trump in a Moscow hotel as garbage. Of the intel "effort" to see it elevated to senior intelligence briefings immediately leaked to the press, he was more polite calling for "intel chiefs" who "made a mistake here" to do the right thing and "apologize."

There's been nothing like this ever occurring with a US President about to take the office. The Deep State is writhing in agony as change is truly arriving in Washington DC. Not only trillions of dollars are at stake but deeply entrenched political interests, globalist and otherwise.

There's never been this much gnashing of teeth since Ronald Reagan was sworn-in and every loyal registered Democrat repeated the line nuclear war was not far off. But hey, we can discuss the lamestream media on another day.

Lets' not quibble about who murdered who or who would like to assassinate and launch acid attacks on unsuspecting US citizens attending inaugural events this week (which will be almost entirely ignored by the Lamestream Media).

This is a happy day. 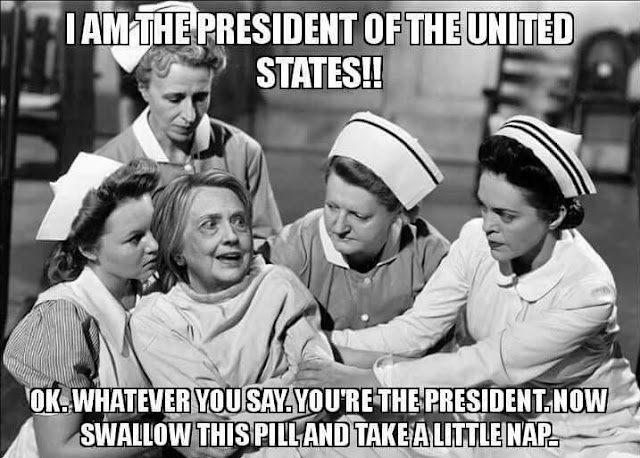 Related: An investigative report on a conspiracy to commit acid attacks on people attending an inaugural event this week at the National Press Club building in DC has been reported to federal authorities.

The planned domestic terrorist attack by disgruntled Leftists is seen discussed on hidden video featured by a conservative undercover videographer from Project Veritas on YouTube. The release yesterday has gone viral without much if any media coverage.

Horsey thought you should know.

All of these toxic ingredients were on full display yesterday as the Deep State unleashed its tawdriest and most aggressive assault yet on Trump: vesting credibility in and then causing the public disclosure of a completely unvetted and unverified document, compiled by a paid, anonymous operative while he was working for both GOP and Democratic opponents of Trump, accusing Trump of a wide range of crimes, corrupt acts, and salacious private conduct.
Posted by SmartyJones at Tuesday, January 17, 2017
Three days out...
2017-01-17T09:00:00-05:00
SmartyJones
Comments