Breaking developments in the murder of Adrian Rivera


SPRINGFIELD - An 18-year-old New Jersey man, wanted in connection with the Jan. 24 homicide of a man in Hoboken, was arrested Friday morning at a home in the McKnight neighborhood, officials said. 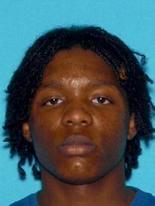 Keyshaun Wiggins
Keyshaun Wiggins was arrested by U.S. Marshals and local and state law enforcement after he was trailed to an apartment at 43 Bowdoin St. He had been staying at the apartment of his girlfriend, according to Marshals spokesman Dave Milne.
He was charged with being a fugitive from justice.
Wiggens is one of three suspects wanted in connection with the shooting death of  18-year-old Adrian Rivera in his family's apartment at the Andrew Jackson Gardens public housing complex in Hoboken, New Jersey.
Rivera was shot during an armed break-in at his home. The two other suspects are in custody.
The complete story:
http://www.masslive.com/news/index.ssf/2017/02/new_jersey_fugitive_keyshaun_w.html


The City of Hoboken offered this official release: