Grist for the Mill: Ready for Launch?

A press conference officially announcing the entry of Councilman Mike DeFusco into the mayoral sweepstakes come November may be only days away.

That's the word emanating among limited Old Guard and Reform circles pointing to a downtown press conference as soon as next Friday or Saturday. The councilman declined to comment on an inquiry calling it speculative.

The first ward councilman who ran with the mayor's endorsement and won a decisive hard fought victory against the entrenched Russo clan's Terry Castellano is returning to the fold. DeFusco rose through local Democratic Party circles as a protege of the late Maurice Fitzgibbons who masterminded the political rise of former mayor and convicted felon Peter Cammarano.


At the last City Council meeting recriminations and harsh words erupted with Councilman DeFusco attempting to present a resolution he said would offer the City options to acquire the former Baptist Church from being converted into condos by its new owner at 901 Bloomfield. Reform oriented council members stomped all over the effort declaring it a political stunt.

The bad blood witnessed by the public was not short in the making. Reform oriented council members have held their tongue on numerous grievances. The dam broke with what many felt was a ceremonial resolution with no teeth designed for pocketing political capital with the public who were unaware about a letter where the owner declined further negotiations with the City.

DeFusco has continued to trumpet his efforts on Facebook declaring he "rallied to preserve the interior" of 901 Bloomfield further irking his council colleagues after the owner's lawyer stated in a mid-December letter no offers of increased density on a lower Willow St. property were practical and construction at the site of the former Baptist Church would commence.

Commenters followed on the councilman's Facebook page applauding his efforts and publicly calling for him to run for mayor.

The setback with the resolution apparently designed to get a win for the councilman who took office in January last year won't slow down the DeFusco Express. As one Old Guard observer who is sympathetic to DeFusco's pending mayoral candidacy declared, "We're hoping for a shooting war to enliven us... action is required," adding that name recognition will be a factor in any face-off against Mayor Zimmer.

That analysis further stated there's a built in opposition to eight years of Mayor Zimmer concluding with MSV, the figure is in the ballpark of 40% opposed. Others on both sides of the political divide say the figure may be higher giving DeFusco a solid base to launch his mayoral candidacy out of the gate.

Elections however are often decided by a quixotic 10% of the electorate who is declared "undecided." In such a scenario, DeFusco would be working hard to convince that group of Hoboken voters he holds a better vision for the Mile Square City while the mayor is too tied to impractical ideas and unable to act on previous errors.

"Some will recoil at the name Dawn Zimmer and some will not. It's got to be an issues driven campaign," the political observer added.

Historically, Hoboken mayoral challengers used the Hoboken St. Patrick's Day Parade to march and introduce their pending candidacy along with their council at-large slate to the public. Since the parade in Hoboken is no more, Councilman DeFusco may leverage that Old Hoboken memory to further galvanize his pending mayoral candidacy announcing next Friday, St. Patrick's Day.

Regardless, the next move is in the hands of the first ward councilman.

Related: Grafix Avenger followed this Grist for the Mill with an Earwitness News Bombshell but the sitting Councilman Dave Mello denies it and says he was not contacted hearing of it only after it was published.

Councilman Dave Mello calls the report he is joining a Mike DeFusco ticket totally false.
More to come with an interview with the two term councilman.

Grist for the Mill is MSV's rumor column. Got a tasty carrot for Da Horsey? Send it to smartyjones@me.com. All email is kept confidential With Da Horsey's proven Reporter Privilege upheld under the NJ Shield Law in Hudson County Superior Court. In farm animals we trust.
Posted by SmartyJones at Tuesday, March 07, 2017
Grist for the Mill: Ready for Launch?
2017-03-07T13:46:00-05:00
SmartyJones
Comments 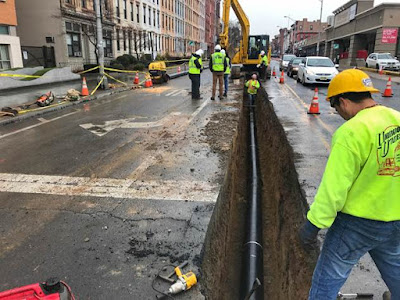 "This investment will move Hoboken towards a more resilient and reliable water main system," said Mayor Dawn Zimmer. “Beyond the initial $12 million investment in our water system that we are making, we are planning to make at least a $5 million investment every year in order to ensure Hoboken has a reliable system. Unfortunately, Hoboken is facing the result of financial mismanagement from the past together with a complete lack of investment in infrastructure going back decades. Now that we have resolved the city’s serious financial problems, we are in a strong position to continue making long-overdue and critically-needed annual investments while also keeping our taxes stable.”

The City’s $7 million investment includes upgrading the 12“ main on the west side, the three 8” main sections on the east side, and fire hydrants on Washington Street. The project will also upgrade 531 service line connections to new valve boxes at the curb.

“It is important that the service lines be upgraded as well so that we can prevent having to dig up Washington Street after it is newly paved,” explained Mayor Zimmer.

The City is also currently working on a $5.2 million plan to upgrade water mains in other priority areas and has issued an RFP for engineering design for this work.

Additional information on the Washington Street project is available at www.washingtonstreetproject.com.