No negative light on Hoboken. Capeesh?

The following is a reprint of a MSV August 2009 satirical article with Jimmy Breslin, the Pulitzer Prize winning journalist who passed away at 88 over the weekend.

Please enjoy the article and "The Good Rat." 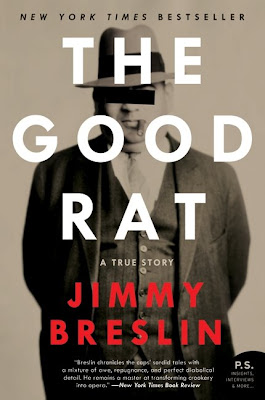 Word around town is that Pulitzer Prize winner, Jimmy Breslin now 80 is patrolling our streets looking for stories on NJ corruption. He made an appearance at the Jersey City protest earlier this week. Breslin arrives just days after the passing of “On the Waterfront” screenwriter Budd Schulberg. Schulberg had just visited Hoboken last week for a reading of his famous Hoboken based movie.

Now who would Breslin speak to for background on his book in Hoboken? Well how could he not speak to say Mike Russo, Hoboken City Council representative and someone who might know something.

Jimmy Breslin: So Mr. Russo, your father Anthony, former mayor had some run ins with the law.
Mike Russo: My family doesn’t know nuthin about dat. And if we did, it would shed a negative light on Hoboken.
JB: So you aren’t denying that your father was a party to the culture of corruption in New Jersey?
Mike Russo: All I can say is that my family has nuthin to say about no corruption. It would be negative to be talkin about any corruption in Hoboken.
JB: Well I happen to be writing a book right now about New Jersey corruption. You know I’m 80 years old and could use some helpful background.
MR: If you want to see Hoboken as it should be, consider speaking to our potential new mayor Terry Castellano.
JB: Does she know anything about corruption in Hoboken?
MR: You can ask her but she’s busy getting ready for my wedding. Don’t think she’ll recall anything. You know it wouldn’t shed a positive light on Hoboken.
JB: You seem very concerned about Hoboken’s public image.
MR: I do not, and will not speak bad about Hoboken. We have rules here, no negative light on nutin. It's bad for business.
JB: And what about those who differ and have protested after the FBI’s information released on the former mayor?
MR: They are not the real Hoboken. Ask them if they were born here.
JB: Well don’t all residents of Hoboken have the same rights as other Americans?
MR: They have their rights. And they have the right not to put negative attention on Hoboken.
JB: I think I’m getting the picture here.
MR: Glad that you are understanding.
JB: Last question, Mike, do you know what century this is and have you ever heard of the US Constitution?
MR: Have you ever heard the saying don’t rat?
JB: Recall that came up in, “On the Waterfront” a famous movie filmed in Hoboken.
MR: I refuse to watch that movie or have anything to do with anything negative about Hoboken.
JB: Okay, got it. Thanks.
Posted by SmartyJones at Tuesday, March 21, 2017
No negative light on Hoboken. Capeesh?
2017-03-21T15:57:00-04:00
SmartyJones
Comments

From the desk of Joshua Sotomayor-Einstein:

I’m running for NJ GOP State Committee to make our state Republican Party a force for outreach, activism, and engagement. New Jersey needs a GOP that will work with grassroots conservatives and libertarians to elect Republicans in purple and blue areas by reaching out to the many moderates and even Democrats who are tired of high taxes and a growing cost of living. The NJ GOP State Committee is the central organ of the New Jersey Republican Party and is made of committee people elected from each county in our state. Elections are held on the same day as the primary, June 6. Contribute to the campaign for a grassroots pop on the GOP State Committee at:
https://www.gofundme.com/gop-state-committee