Councilman Mike DeFusco, the first ward councilman edging toward a possible mayoral run against Mayor Dawn Zimmer is slated to hold a "Pride Night Out" fundraiser at the Dubliner this Monday.

The fundraiser was initially posted on a Jersey City resident's Facebook page, Demetrius Terry, who calls himself an intern to the councilman and is a former aide to Carmelo Garcia in the NJ Assembly.

The fundraiser would be the second for the first ward councilman in as many months. DeFusco has neither confirmed nor denied any intentions to run for mayor this November. 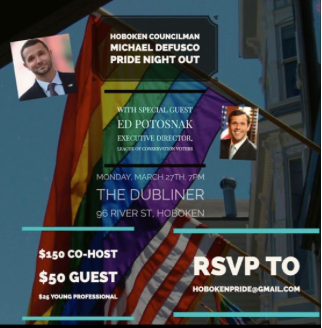 If confirmed, the second fundraiser in as many months would suggest Councilman DeFusco is making a serious bid to raise money to face-off against Mayor Zimmer for the mayor's seat.

Talking Ed Note: The March 31 deadline looms for candidate filings with NJ ELEC. Is this would be fundraiser part of an effort to tally up?

The City Council is set for a budget hearing Monday night. We'll await to see if Councilman DeFusco shows for either or both events.