Mayor and council statements on verbal altercation video in Hoboken

Mayor Dawn Zimmer issued the following statement following an incident of hate speech that occurred in Hoboken on Saturday, May 6th:

“The hate speech by the Vape Van owner is reprehensible and does not represent Hoboken’s diverse and inclusive community. The Hoboken Police Department is investigating this incident. In addition to this being extremely offensive hate speech, as a vendor licensed by the City of Hoboken, they are obligated to follow all of our rules and regulations, and clearly they have not. Therefore, I am asking the City Council to revoke their vendor license, and I thank Councilmen Bhalla and Ramos for agreeing to co-sponsor the resolution. The Council previously adopted a resolution condemning the recent rise in hate incidents nationwide, and this repulsive act presents an opportunity for our local government to take tangible steps to put our words into action. Leaders at all levels of government need to speak out, and we need to stand together as a country against this hatred.”

“As proud sons of immigrants, we write to express our complete disgust with the hate incident involving the owner of the Vape Van vendor truck in Hoboken, New Jersey. This conduct has no place in Hoboken. This individual’s actions do not reflect the views of businesses or residents in Hoboken. Hoboken is a city of immigrants and we take great pride in this tradition.

As referenced in Mayor Dawn Zimmer’s statement issued today, we will be sponsoring a Resolution to revoke the Vape Van’s license to operate a mobile vendor truck within the city limits of Hoboken.

This action implements the policy directive of a December 7, 2016 Resolution adopted by the City Council. This Resolution formally commits to “creating a community that is free of bias and prejudice,” and “pursuing a policy agenda that affirms . . . that those targeted on the basis of race, religion or immigration status can turn to government without fear of recrimination.” The forthcoming Resolution revoking the Vape Van’s vendor license is an opportunity to implement the policy expressed in the Council’s December resolution.

Furthermore, we call upon Hoboken’s business community to join local city officials in expressing its embrace of Hoboken as a welcoming and diverse community. Specifically, we request Hoboken’s businesses join the Business Against Bigotry campaign of the American Independent Business Alliance. Through this program, we are offering window decals, free of charge, stating “We Welcome Everybody/Diversity Strengthens Our Community”. In addition to businesses, this window decal is available to schools, non-profits, houses of worship and business owners. To request a window decal, please email Councilman Bhalla at councilmanbhalla@gmail.com and provide the address where you want your decal to be mailed.”

In the video, part of a verbal altercation between two men and two large vehicles shows one being the notorious Vape Van. There's cursing and one man giving the other the middle finger at the HCV link.
Posted by SmartyJones at Monday, May 08, 2017
Mayor and council statements on verbal altercation video in Hoboken
2017-05-08T16:30:00-04:00
SmartyJones
Comments

Hoboken FYI: Beware of the Phone

Some Hoboken residents may be dreading picking up their phone with reports coming in all weekend of a push poll and the unofficial foreboding entry of election season.

Election season in Hoboken is known for being a bruising affair for candidates, staff and supporters alike. Then there's the civilian casualties and exploitation of Hoboken's most vulnerable population as they are herded to turn over unfilled paper ballots for cash.

The push poll began Friday night based on reports to MSV and continued all weekend alarming residents with its misinformation and less than obvious intentions.


The questions in the poll appear designed to attack Mayor Zimmer and see her positive ratings diminish as the November election approaches; the only poll that actually matters.

An earlier poll this year is thought to have been commissioned by the Zimmer campaign and this one is believed part of a strategy preparing to launch First Ward Councilman Mike DeFusco's highly anticipated entry into the mayoral sweepstakes.

In the first quarter, Councilman DeFusco brought in almost $90,000 in campaign fundraising toward his next council race. Under NJ law however, switching a council campaign fund to a mayoral campaign is all but a simple administrative exercise.

The people behind the weekend push poll are big time Hudson County political veterans. Their entry into the race means a serious effort to unseat Mayor Zimmer is underway. MSV has reported on this outfit in the past who have lots of campaign experience in Hoboken.

The names will be no surprise to many familiar with Hudson County campaigns. They are named in today's MSV Premium.

The rest of this story is MSV Premium content and went out to members via email.
If for any reason, you didn't receive your issue, please drop a note to smartyjones@me.com. 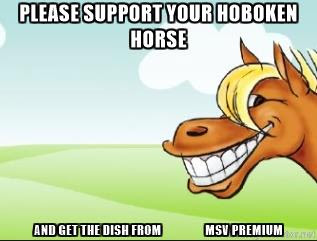