Hudson County Young Republicans Chair: "In Defense of the Indefensible" 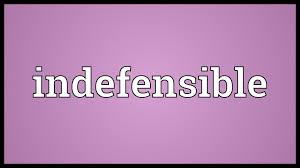 The anti-Vape Van crusade being pursued by Mayor Zimmer and councilmen Bhalla and Ramos is as indefensible as the bigoted language which prompted it. In a classic example of the big government game – “Let’s Make a Bad Situation Worse,” Zimmer and the councilmen are attempting to profit politically from the disgustingly bigoted language choices of a member of the Vape Van team in order to appear as defenders of the public good.

There is no moral excuse or reason for bigoted language. That most humans will occasionally engage in stereotyping, deploy what they falsely believe to a humorous double entendre, or use derogatory language about a presumed group identity or outwards feature of another is irrelevant to our societies desire to move past the language of irrational hate and fear.  Education is the key to fighting bigotry because it brings to light to the shared humanity, similar aspects, and history of different persecuted groups. Hounding hate by stomping down on it, for example, by revoking the permit of every business with an owner or employee who says hateful statements, pushes it into the dark where it may fester, can grow quietly and unnoticed, and eventually boil over into mass movements or bias crime.

The statements by the mayor and councilmen Bhalla and Ramos bring to the forefront many questions. By revoking a business permit because of the speech of an owner or employee, is our local government supporting the public good? Constitutionally, is not hate speech free speech? Can government really protect us from everything offensive in the world or even our town? Should it even try? How is the line drawn for what speech is considered so intolerable that it requires the shuttering of a business? Who draws this line and why?

As a conservative Republican, I don’t always agree with the ACLU, but when they defend the right to publicly state offensive beliefs and correctly argue that this protects the ability of everyone to proffer our own beliefs without worry that government thought police will come knocking or kill one’s business, I stand with them. As a Jew (and a normal human), I clearly dislike the West Boro Baptist Church and the KKK, but protecting their legal right to posit their warped hateful beliefs without government interference keeps the dam of civil liberties buttressed against government censorship and stops the persecution of all individuals and groups.

Unlike the seemingly homophobic recent text that Irene Sobolov, Hoboken School Board Trustee, sent to her fellow School Board Trustees and the Hoboken Superintendent, the Vape Van team member is not a public figure, nor elected leader who some believe should be held to a higher standard. In that case, a public figure supported by the Zimmerite political faction was essentially given a pass because of her factional affiliation - in this case a private business is under threat because of the hateful words of a private citizen. No one expects all business people to be the role models many expect the Board of Education Trustees (and other who deal with education) to be, yet neither Mayor Zimmer nor councilmen Bhalla or Ramos called for Sobolov’s resignation or even admonishment.

Unfortunately, I will not be able to attend the Wednesday meeting of the City Council as a prior commitment to a local political dialogue group of Democrats and Republicans being held in Jersey City takes precedent, but it is my hope that the council will take a stand both against censorship and for the freedom of speech, even when the content of that speech is indefensible.

MSV welcomes guest pieces of 1,000 words or less. Submissions should be sent to smartyjones@me.com. Please include contact details for verification purposes.
Posted by SmartyJones at Wednesday, May 17, 2017
Hudson County Young Republicans Chair: "In Defense of the Indefensible"
2017-05-17T08:03:00-04:00
SmartyJones
Comments