Council President Jen Giattino: "I announce my candidacy for mayor of Hoboken"

Tonight, an overflowing crowd of 75 people stood near the corner of 4th and Bloomfield to see Council President Jen Giattino announce she's running for Hoboken mayor.

The crowd exploded in sustained spontaneous applause on her entry from former BoE trustee Ruthy Tyroler's home. In addition to a raucous crowd of supporters, Giattino was joined by her family and council member Peter Cunningham and Tiffanie Fisher. Also seen in attendance, former councilman Tim Occhipinti who was on hand to lend his support.


Remarks as prepared for delivery by Council President Jen Giattino.


City Council President Jen Giattino’s announcement becoming a candidate for Hoboken mayor
My name is Jen Giattino, I have been a resident of Hoboken since 1998. I am a wife, the proud mother of three and a businesswoman. I am serving my second term as a Hoboken City Councilwoman, for the 6th ward and also serving my third term as Council President. Today, I am thrilled to be surrounded by so many supporters as I announce my candidacy for Mayor of Hoboken.

It’s been my honor and privilege to work with and for the residents of Hoboken. We all share in the success of working together in recent years for this city we love and call home. Working as a team, we’ve accomplished a great deal. As our Mayor, for our town, I will continue to drive the many initiatives begun with Mayor Zimmer that have paved the way for our improved quality of life. However, I believe that it is critical that we also take a fresh look at where we are and give a lot of thought about where we want to be and how to get to the next level.

Our Hoboken today is confronted with a host of issues old and new: our aging infrastructure which requires significant and continuous investment, our flooding concerns, keeping taxes flat in the face of rising municipal costs, making sure our streets are safe for everyone, and our unique land constraints which creates the need to secure open space for future generations while we still can. These issues have been the focal point of our current Administration, and continue to require our steady focus to make Hoboken more livable for all of us.

But our current Administration has fallen short in certain areas that I believe should be front and center going forward. We need to align the public and private sectors in a partnership to address the economic health and vitality of our city that has been overlooked. This means working collectively with all stakeholders, including our diverse residents, our City Council, our business community, our schools, Stevens, and other community leaders to identify the best ideas and a fresh vision for economic and community development while still prioritizing our quality of life. It means executing a strategic plan that allows us to attract jobs and businesses that benefit Hoboken residents which will allow us to focus on future commercial development, instead of just building more residential towers that add to our overcrowding. But, in any development that occurs, which is inevitable given the attraction to our town, we will ensure that we determine the direction and that the benefits to our community far outweigh the costs. We also need to do as much as we can to make sure that Hoboken residents are invited to stay. There is room for everyone in Hoboken. Our town and our people are better when we support our neighbors.

These are only a few of the areas that as our Mayor, I will prioritize. The conversation and the hard work for this vision lie ahead but together we can bring a new vision and a revived spirit to our town.
As we begin this journey together, I want all of you to know how important you and your support have been in bringing us here today. It is with this support that we can deliver for Hoboken and build for tomorrow. I’m asking today and in the coming days that we all come together again and make this campaign a symbol for what Hoboken can do when we combine our talents and skills for the city we love. Together we’re going to do amazing things for our town. It’s our time. It’s our Hoboken.
Thank you!

Grist for the Mill: Hoboken the envy of political junkies across NJ

The time for action is apparently now with Stick Romano doing a pivot and diving into Hoboken's mayoral race at a steeper angle than a jet fighter sighting an enemy aircraft carrier.

Later today, the Hoboken field is expected to see its City Council President Jen Giattino announce her entry into the mayoral sweepstakes bringing the total to four of the Mile Square City's major election campaigns.

People are yet to catch their breath or see campaigns announce full council slates as the reverberations of Mayor Zimmer's untimely exit announced last week has created a bad case of whiplash for Hoboken political observers.

The clearly orchestrated political power play didn't succeed in pushing Hoboken activists to the sidelines resigned to backing Ravi Bhalla. It produced the opposite effect: engagement. A Sunday meeting last weekend where about two dozen long time reformers and previously strong backers of Mayor Zimmer sat down to examine the viability of a Jen Giattino victory in November.

The conventional wisdom going in deemed a late mayoral bid would see no path to victory for any desired Mayor Giattino administration and end with a consensus, resigned or not, to get behind Councilman Ravi Bhalla.

Except it didn't work out that way. Prior to the Sunday afternoon meeting, a vicious political operation was deployed assaulting Councilwoman Tiffanie Fisher's electronic communications. An orchestrated coordinated onslaught of mostly new Hoboken Democratic Committee people emailed and texted her with vile personal attacks calling her and Council President Jen Giattino a string of ugly names typically reserved for the mostly defunct Ku Klux Klan. Another massive email bomb questioned Jen Giattino's vote for president last November demanding to know who she voted for even as it's commonly known she sought to be a John Kasich delegate. The poison was clearly all cooked out of the same stew falsely claiming Giattino had voted for Donald Trump. Fisher would dryly note the same calling the false allegations spurious in reply.

Whatever happened to the right to privacy of one's vote let alone Hoboken's long time non-partisan municipal contests and Hoboken reform's big tent? Democrats as Mayor Zimmer was later to find out were aghast. Silence from the people hitting the nuke button since as some including this Horse made rare emails up the chain of command asking how could such a thing happen?

Fisher didn't allow the coordinated fury of venom to interfere with the meeting. The meeting went ahead as planned but the thoughts of uniting behind Ravi Bhalla evidently turned into a non-starter. Among the dozens of people in attendance, mostly dye in the wool Democrats including Fisher herself, word of the vicious email assault was spreading all over town. So was the backlash, acting as a one-two punch to the mayor's presser last Tuesday that spurred distaste all over the Mile Square City.

The meeting surprisingly ended with reformers united in praise for Jen Giattino and to a person concluded she is the most qualified and the best person to become Hoboken mayor and no alternative backing Ravi Bhalla would be contemplated. Someone has some explaining to do.

The ugly political operation to keep Giattino from considering a bid to get into the race achieved the opposite effect. All the colluders in the unseemly intimidation scheme, stand up and take a bow!


Talking Ed Note: The Hoboken mayoral campaign pool is not complete. Already, another potential Old Hoboken candidate is rumored to be weighing an entry. The uptown resident who won't be named here as it's uncertain and he's made no overture to MSV will be seeking to catapult an age old dream. This time family connections into Church Towers would be the launching point for votes, right in the territory of Third Ward Councilman Michael Russo.

Let's call it what it is, a hostile invasion.

This is going to be a cantankerous mayoral race like nothing seen. Baton down the hatches.


Grist for the Mill is MSV's rumor column. Got a tasty carrot for Da Horsey? Send it to smartyjones@me.com. All email is kept confidential and is protected by Da Horsey's proven Reporter Privilege upheld under the NJ Shield Law in Hudson County Superior Court. In farm animals we trust.
Posted by SmartyJones at Tuesday, June 27, 2017
Grist for the Mill: Hoboken the envy of political junkies across NJ
2017-06-27T14:43:00-04:00
SmartyJones
Comments

The DeFusco for Mayor campaign announces:

Hoboken, NJ – In response to the announcement today by Freeholder Anthony “Stick” Romano that he will run for Mayor of Hoboken, 1st Ward Councilman and current Mayoral candidate Michael DeFusco issued the following statement:

“Today we saw a Freeholder testing the waters with an announcement that sounded more like an exploratory committee than a legitimate bid for Mayor.  He spoke about commitment, yet proposes to run for both offices at the same time, expecting the people to wait while he decides which suits him best.  That’s not leadership, it’s duplicity and hypocrisy.  Every resident of Hoboken should be offended by his level of entitlement.”


“We need a leader with an understanding of where we are, a vision for where we are going, and the dedication to get us there.  I’m emboldened as ever to continue my campaign of speaking to as many residents as possible about the important issues at hand so we can eliminate the political divides of the past for a unified and progressive future.”
Posted by SmartyJones at Tuesday, June 27, 2017
Councilman Mike DeFusco comes out firing at Stick!
2017-06-27T12:25:00-04:00
SmartyJones
Comments 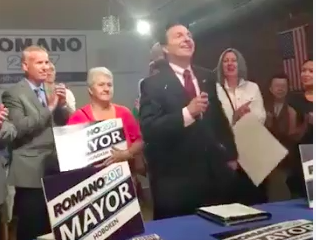 After last week's stunning reversal where Mayor Zimmer dropped out of the race, the floodgates have been opened and as expected Romano becomes another major candidate to compete for the office.

Romano made an impassioned and emotional appeal in his remarks earlier today speaking of his connection to the community and acting as a link between government and the people.

Here is the complete announcement of Freeholder Anthony Romano: