I look forward to seeing you this Monday evening at Moran's to help me kick off my campaign!

Thank you to the many who have shown their support already for my candidacy for Mayor.

As each day passes and I talk with more of our neighbors, I am increasingly excited about what we will be able to achieve together for our city! See you in 5 days!

* if you cannot join Monday and would like to contribute to my campaign, please click on the link below. I appreciate everyone's support! 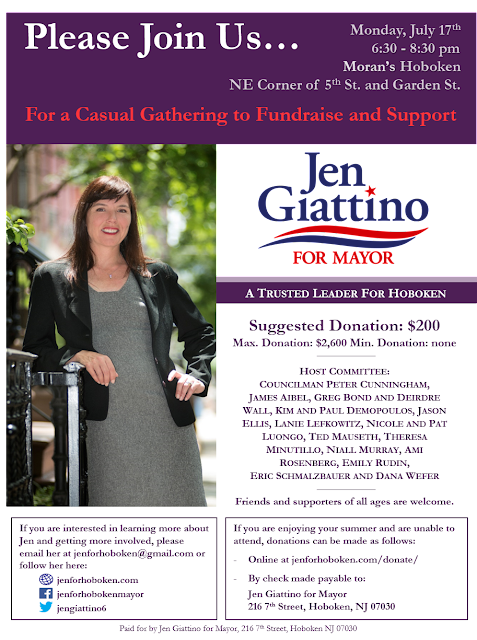 It's not quite the glory days of SNL with Point-Counterpoint where they'd mix it up with a taste of politics skewering all points of view but today's Bhalla vs. DeFusco or is it DeFusco vs. Bhalla holds all the entertainment value of your basic rock'em sock'em robots.

For those of you dated enough to recall games with mechanical physical flair before the digital age; this one was jam packed with action and fun.

The Hudson County View has all that action:
http://hudsoncountyview.com/in-hoboken-defusco-goes-after-bhalla-for-adding-political-establishment-attorney/

On another front, the announcement of the Bhalla campaign's council at-large slate leads to the question of what happens with reform oriented council member Dave Mello?

Mello who has served eight years on the City Council came up through the ranks of the parks group in southwest Hoboken where park space became a major issue and led to the formation and pending launch of the park at Jackson and Observer.

While Mello wasn't immediately available for comment on today's news, sources close to the at-large councilman who garnered the highest council at-large vote totals in 2013 say he isn't going quietly into the night.

"Mello is most certainly running for council at-large. After advocating for a unique bundle of issues since 2009, he doesn't want to see that end," said the source. Word is Mello is in the process of setting up ELEC required paperwork and will run as an independent or join another full-fledged ticket.

Unofficially with a hat in the ring, that brings to potentially three the number of independent council candidates who are vying for one of three at-large council seats this November.


DeFusco statement on proposed Suez contract
Hoboken, NJ – Councilman Mike DeFusco, a candidate for Hoboken Mayor, is releasing the following statement regarding the proposed contract between the city and Suez Water announced today by Mayor Zimmer:
"Mayor Zimmer has had nine years in office to reach this agreement and announcing it now shortly before an election to succeed her as Mayor is troubling, especially given that if approved this contact would be in effect for decades. The proposed agreement deserves serious scrutiny from both the Council and the community to ensure that it's the best possible deal for the city. It's particularly concerning that the contract would include an annual rate increase of at least 2%, which would amount to yet another hidden tax on Hoboken residents that many will struggle to afford."
Posted by SmartyJones at Wednesday, July 12, 2017
DeFusco blowback on announced potential City of Hoboken Suez water contract
2017-07-12T13:15:00-04:00
SmartyJones
Comments


DeFusco 'Shocked, Stunned' that Politically Connected Lawyer Bhalla Selects Politically Connected Lawyer as Running Mate
Hoboken, NJ – Councilman Mike DeFusco, a candidate for Hoboken Mayor, released the following statement in reaction to the announcement by fellow Councilman and mayoral candidate Ravi Bhalla of his Council slate:
"It was difficult to contain my shock at hearing that Ravi Bhalla, a politically connected insider lawyer at one of New Jersey's most powerful law firms, made the stunning choice to select a fellow political establishment attorney in John P. Allen for his Council slate. Who could have ever guessed that a lawyer like Ravi, whose law firm was paid over $3.8 million in government contracts in 2016, would decide to run with a lawyer whose firm was also paid over $3.8 million in government contacts? A truly inspired, outside-the-box pick."
"In all seriousness, this is just the latest example of a candidate for Mayor in Ravi Bhalla who claims to represent reform, but who in reality is a pay-to-play lawyer more interested in the next government contract than in delivering for the people. That's who Ravi Bhalla is and this selection of a fellow insider attorney is just the latest proof."
Posted by SmartyJones at Wednesday, July 12, 2017
Mike DeFusco slams Ravi Bhalla's "politically connected" slate mate
2017-07-12T11:46:00-04:00
SmartyJones
Comments

Councilman Bhalla said, “Together, Jim Doyle, Emily Ball Jabbour and John Allen combine proven experience with new ideas and energy. That’s the right combination to keep Hoboken moving forward.”
Mayor of Hoboken Dawn Zimmer, who is backing Bhalla for Mayor, enthusiastically endorsed the Council slate.  “Jim Doyle has been an outstanding and invaluable member of the City Council with an impressive record of accomplishment.  Emily Jabbour and John Allen bring the skills, smarts and fresh approaches we need. They will be great additions to the Council.”

Elected to the Council in 2013, Jim Doyle is a Council leader on securing park space and upgrading parks, actively supporting new park acquisitions such as the planned Northwest Resiliency Park.  He serves as Chair of the Masterplan/Zoning Ordinance Committee. He is an environmental attorney with more than 29 years of experience, working for both the US Environmental Protection Agency and the U.S. Department of Justice.

Emily Ball Jabbour is a Senior Social Science Research Analyst for the Administration for Children and Families, part of the U.S. Department of Health & Human Services. Emily founded the Hudson County Chapter for the national grassroots organization Moms Demand Action for Gun Sense in America.  In this capacity, Emily has worked with local law enforcement to distribute gun safety materials across Hudson County and provide 200 gun locks to the Hoboken Police Department for distribution. Among other civic commitments, Emily served as the HOPES Liaison for the Brandt Parent Consortium for the 2016-17 school year.  She is a graduate of Boston College and earned her Master’s of Science in Social Work at Columbia University.

John Allen is an attorney at the law firm of Schenck, Price, Smith & King, LLP, where he specializes in the representation of governmental bodies, including boards of education and municipalities.  He serves as a Hoboken Democratic Committeeman and is on the Board of Directors of Easterseals New Jersey, one of the state’s oldest and largest charitable organizations dedicated to empowering individuals with disabilities. He is a graduate of Rutgers University and earned his law degree at Rutgers School of Law, where as an Education Fellow he prepared curriculum for continuing education classes for school leaders and administrators in New Jersey and New York.


The candidates pledge an active grassroots campaign reaching out to voters in all corners of Hoboken. 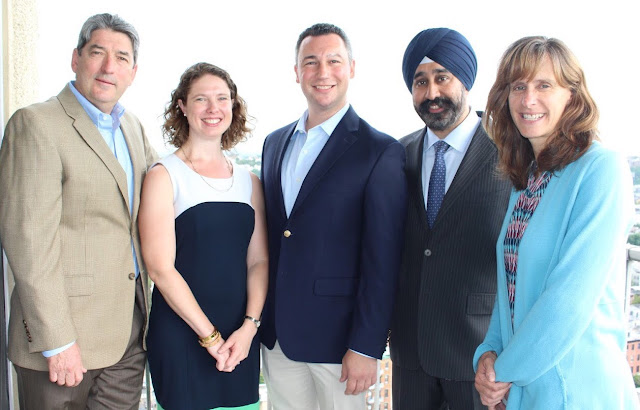