Dana Wefer, the former Hoboken Housing Authority Chair makes her support clear who should be Hoboken's next mayor.

Wefer adds her reason for supporting Jen Giattino is because after working with her over several years as the HHA chair, "I trust Jen... to administer the budget. I trust her to keep taxes flat... I trust Jen to make sure every voice is heard and considered and to do the right thing for Hoboken."

The results are posted here along with a link for those who wish to vote. While it's unscientific, it's certainly not less scientific than a push poll cited by some previously on behalf of the Bhalla campaign.

Which should be a lesson to those who wish to cite push polls as valuable to serve political objectives.

Here's the poll results mid afternoon. It's going to get hijacked by operatives but a snapshot is below. 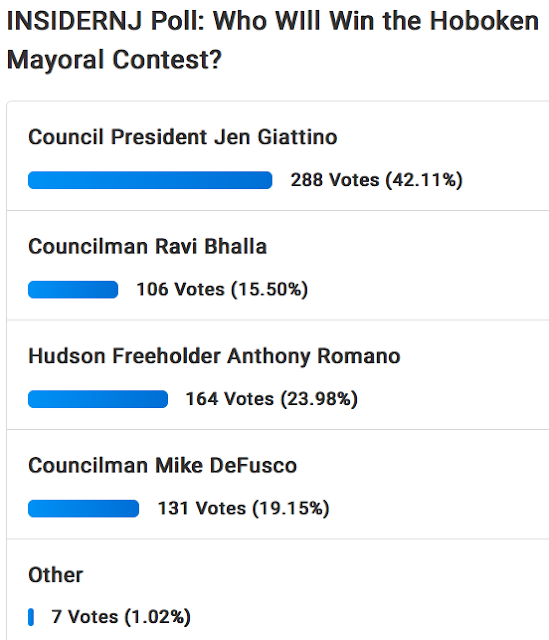 The online poll is available at the link:
https://www.insidernj.com/insidernj-poll-will-win-hoboken-mayoral-contest/

The following report comes courtesy of the Hudson County View: 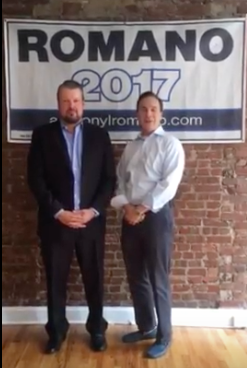 “He is someone that comes with a lot of successes and experience: eight-year Hoboken councilman, a former teachers union representative, currently a public school teacher in Jersey City, father, husband and an integral part of the successes Hoboken has achieved over the course of the last year,” Romano said of Mello in a Facebook video.

Romano campaign to get Mello?

Mayoral candidate Anthony "Stick" Romano, the current freeholder is about to get a boost.

According to one source who can't provide further support to their claim, two term councilman Dave Mello is about to be announced as a candidate on the council at-large slate of the current freeholder.

The Romano for Mayor campaign stands with one council candidate at present, Laini Hammond, an unknown to Hoboken residents with political ties to Jersey City being friends with the Jersey City mayor's wife Jackie.

All the major slates feature council at-large candidates who are not well known in local activism. Councilman Dave Mello connected to reform issues and his early participation for a Southwest Park would be a coup for the Romano for Mayor campaign.

Mello who announced an independent bid recently for a third term on the council may prefer the Romano option but he's not announcing anything for the moment. He was out of town on the Jersey Shore and unavailable for comment on this gristy chewable.

This week something is going to break one way or another. The Romano campaign has two at-large council seats to announce. Expect the dam to break this week. One pro DeFusco commenter here claimed Romano would be dropping out last week.

How will State Senator and Union City Mayor Brian Stack react to word his former Chief of Staff is breaking his country rule on neutrality in the Hoboken mayor election? His former staffer, Wendy Martinez is said to be calling a slew of North Bergen vendors raising big bucks for the Hoboken mayoral election.

Stack and Sacco have been rivals but a truce is in effect after the infamous 2007 Hudson County war between the NJ political powerhouses. Is dipping the wick in North Bergen raising funds for a Hoboken mayoral race a problem?

The Hudco machinations are all for the benefit of Councilman Mike DeFusco's mayoral bid. A claim he recently raised $75,000 at the fundraiser on Pier 13 at the announcement of his last council at-large candidate Vanessa Falco didn't make any sense. With the machinations going on in North Bergen, the picture gets less cloudy.

If you see any claim of an endorsement by this farm animal or a jolly green giant for the Bhalla for mayor campaign on Facebook, don't believe it. There's a political operation drafting Hoboken residents and private citizens against their will putting words into their mouth and it goes all the way to City Hall and the mayor's office.

Talking to a candidate is not an endorsement and doesn't give one license to write and post one making it up. Shades of failed transparency and worse rearing its head in this mayoral election. Again.

There's an endorsement apparently none of the major mayoral campaigns want: one from Beth Mason! Her Weehawken bottom feeding fish is calling around to offer the former notorious councilwoman's endorsement but not finding any takers. He's cursing up a storm trying to identify why and who is spurning her desires.

Apparently a public endorsement even with a check from Beth Mason is not considered a smart move politically if word gets out to the Hoboken electorate. Well, not everyone is politically tone deaf in the Mile Square City.

Grist for the Mill is MSV's rumor column. Got a tasty carrot for Da Horsey? Send it to smartyjones@me.com. All email is kept confidential and is protected by Da Horsey's proven Reporter Privilege upheld under the NJ Shield Law in Hudson County Superior Court. In farm animals we trust.
Posted by SmartyJones at Monday, August 14, 2017
Romano campaign to get Mello?
2017-08-14T08:58:00-04:00
SmartyJones
Comments