For some time, no one wanted word to get out. Rumors were circulating that the notorious and noxious Carmelo Garcia was backing Mike DeFusco for mayor and he was fundraising for the cause in parts south in the vicinity of Newark.

Earlier, this flyer was discovered in a building of the Hoboken Housing Authority:

The flyer urges people not to hand in their Vote-by-Mail to "anyone you don't know." Vote-by-Mails are usually signed and mailed by the recipient. But with the list of known VBM recipients in the HHA and senior buildings public information, a war is brewing for who will "handle" the ballots.

It reeks of a whole lot of poopy.

This doesn't even begin to see opened the can of worms for voters across Hoboken. The flyer is strong evidence by it's discovery in the HHA strongly suggests Carmelo Garcia who is currently suing both the HHA and the City of Hoboken for seeing his contact terminated supports Mike DeFusco.

Talking Ed Note: The Romano campaign was not immediately available for comment about the flyer on their main rival and the Mike DeFusco campaign has not responded to inquiries to date.

What smells worse than a three day old fish left out on the street?
Well, a sign planted on a mailbox on the corner of your block with your surging campaign rival.

How did it get there?


The store in the background is sporting not one but two Jen Giattino signs for mayor in the window. So what would be the motivation to add a third so close and illegally on a mailbox no less? It makes zero sense.

The Giattino campaign denies any involvement in the stupidity. Whoever planted the sign to score points is apparently unaware City Council President Jen Giattino pushed to keep all flyers off cars and telephone polls illegal posted in Hoboken. She even arranged for a cleanup on the same issue with volunteers back in 2011.


Even the Old Guard isn't known for putting campaign signs on mailboxes. Guess who's pushing this obvious canard? Who else is doing an updated low brow edition of Hoboken411? Yes, it's the frick and frack of anything goes blogging.

Spreading this easily see through propaganda is exactly the type of Hoboken411 fare we'd see in years past but now it's a Sybil's Cave staple. What you won't see there is an apology for the sexist demeaning attacks on Jen Giattino and by extension her family last week for inserting her "appearing" on the "dating game."

It's a shame but that's how desperate they are. Let's call this latest obvious hit job what it is: #FAIL!

The original August 2011 MSV story where Jen Giattino worked with volunteers to clean up flagrant flyers from the streets at the jump.

Hoboken election season enters the final three weeks as clashes between the mayoral candidates come to the fore. Over the weekend, word of some of those clashes from the unreleased Hudson Reporter mayoral forum began trickling out. The forum video usually arrives near the end of election season.

A story over the weekend pointed to issues amid the clashes during the forum. One touched on the national issue of illegal immigration and a "sanctuary city," what other Americans call outlaw cities. Federal immigration departments and its law enforcement arm often reach out to local law enforcement and ask for a hold on those being held for alleged crimes who may not be in the country legally. In some locales, the cooperation is nullified by local officials who have decided not to cooperate with the federal government. Last year, this became a national election issue as Americans expressed outrage at the mayhem and murder their families suffered at the hands of illegal immigrants often released back into the community. Municipalities who ignore federal law may lose federal funding as a result.

At the mayoral forum last week, Councilman Ravi Bhalla who has been referred to as a national candidate with ambitions for higher office is quoted seeking to "codify" how to "help protect immigrants in town." No one of course believes this has anything to do with legal immigrants; Hoboken's not exactly known for its inviting housing costs.

What Ravi Bhalla would seek to "codify" is at the moment uncertain but it has nothing to do with any legal immigrant in Hoboken. Coming on the back of the divisive rhetoric where the Bhalla campaign pointedly avoided condemning all involved in political violence at Charlottesville last summer may further raise eyebrows and make some Hoboken voters uncomfortable. With six mayoral candidates and four major mayoral campaigns, the Bhalla campaign however clearly believes it can successfully use divisive rhetoric to advantage. Only 30% or less of the mayoral vote may be all that's needed to win the chair at City Hall with four competitive mayoral campaigns.

Hoboken residents have seen a blitz of campaign mailers this election season and the pace has only picked up in recent weeks. Councilman Ravi Bhalla sent out another four page color mailer and leads the race with at least three similar variations among others. Those expenditures run well into the tens of thousands of dollars.

Team Romano has staked out a group mailer theme for its council slate in recent weeks while also taking out TV ads during Yankee baseball playoff games. The campaign created two looking to appeal to Hoboken voters next month.

City Council President Jen Giattino sent mailers, one on Quality of Life and a recent Quality of Life video at Elysian Park uptown. The mailer pointed out numerous street lights that are out and the video at Elysian showed numerous craters on the children's playground. Wouldn't you know it, the lights were all replaced and the holes in Elysian are now all filled. Residents want to know if they should write thank you notes to City Hall, the Council President or is it vice versa?

The DeFusco campaign released its latest mailer last week pointing at Ravi Bhalla and his conflicts as a partner at the law firm Florio Perucci. This one says potential conflicts of Ravi Bhalla could cost Hoboken taxpayers millions related to the Suez water liability of $8.35 million.

Hoboken residents can rest easy knowing those and other conflicts like NJ Transit magically disappear like a Festivus miracle if Bhalla wins the mayor's seat. A resignation from the law firm would erase the conflict on the city council and make everyday in Hoboken a Festivus celebration. 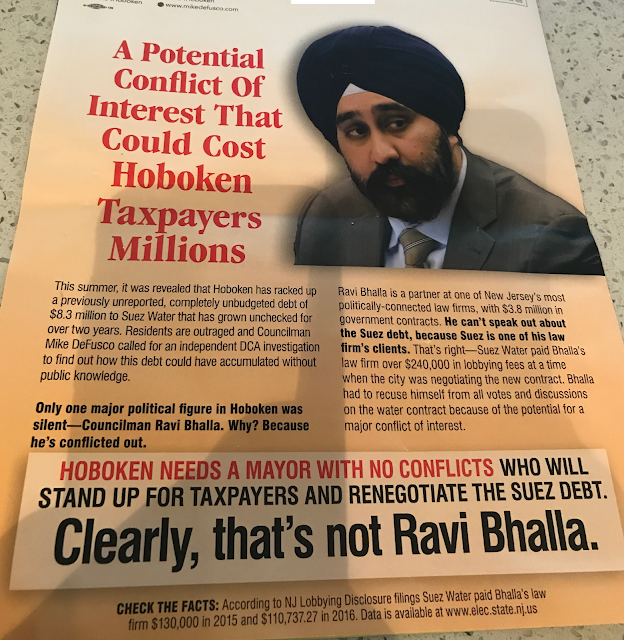 All of this campaign activity will come to a pause at least for residents' mailboxes when the mayoral candidates line up for their forum this Thursday at the Stevens DeBaun Auditorium.

Tonight, it's part two of the council forum. Councilman Dave Mello managed to swap places with Buddy Matthews. It should add heaps of fun to the proceedings at the Multi Service Center.

The personal attacks heightened by the fanatical support of the Ravi Bhalla campaign at Sybil's Cave took another ugly spiral down the gutter last week. While the news value there approaches nil this election cycle, the depths of attacks waged against Reform supporters and officials including City Council President Jen Giattino has risen to the level of outright sexism.

Last week, it was suggested this MSV editor had romantic designs on the candidate who is married with a family. One graphic offered a "dating game" between the two. Commenters at Sybil's Cave who are backers, underwriters and work on the Bhalla campaign followed with levels of vitriol not ever seen on Hoboken411.


In more than eight years, MSV has taken on more than a few big stories publishing numerous exclusives. In that time, the Old Guard pulled stunts and tried to burden this editor with fabricated legal claims of both the civil and criminal variety with criminal assaults and threats of more thrown in for good measure. In all that time, there never was any allegation MSV coverage is due to romantic designs on Mayor Zimmer who is also married with a family.

To mock the accurate report on the announcement of City Council President Jen Giattino's mayoral launch is an obvious attempt to besmirch her mayoral campaign in cheap sexist terms. Nancy Pincus, formerly a reform supporter, wasn't there and didn't see the thunderous ovation for Giattino as she arrived. She doesn't attend any Hoboken campaign events other than for Ravi Bhalla. The Bhalla campaign feeds her information to use against its campaign opponents. Is this sexism also acceptable?

Both Jen Giattino and her family deserve an apology. We'll see if Nancy can manage one.

Related: This political website has no connection to the blogs Grafix Avenger and Hoboken411. MSV is continuing its news affiliated relationship with the Hudson County View.