The political block plot last June didn't achieve the desired effect, last week's push poll backfired with the results revealed on MSV and hundreds of thousands of dollars spent to hold any theoretical lead appear fading for the Bhalla campaign.

With campaign financial reports out, City Council President Jen Giattino stunned her opposition demonstrating a strong six-figure plus fundraising effort ($136,000) even as she was last out of the gate with a fly by your bootstraps effort cobbled together by resisting Reform activists.

Worse for the Bhalla campaign, indisputable evidence of which candidate has the backing of most Hoboken Reform activists and Mile Square residents is available to the public - and it's Jen Giattino!

Team Giattino's campaign report is a grass roots display of page after page of contributions, most in the three-figure range - almost all of it coming from Hoboken residents.

Under withering attack to undermine and halt her campaign effort before it had begun, Team Giattino marshaled a late June resistance combining elements of the Hoboken Reform Movement and Mile Square residents with effective campaign fundraising. It's further evidence of the support and belief in Jen Giattino with her more than six years of service on the City Council.

The Bhalla campaign appears a spent force, propped up by a lame duck mayor who is now a featured part of a negative campaign effort and non-stop assault against Jen Giattino. Another Bhalla campaign fundraiser will look to replenish campaign coffers down to 21K from a whopping $284,000. Heading into the election, the Bhalla campaign now finds itself with less money on hand than their upstart reform rival.

More than a few have pointed out in recent days, the negative attack attributed to the mayor in the latest Bhalla campaign mailer stating, "I personally know all the candidates for mayor, and Ravi Bhalla is the only candidate I trust to keep Hoboken moving in the right direction."

One commenter here noted Hoboken is not moving in any positive direction with the Washington St. construction halted and many months behind schedule. The recent revelation of a $8.35 million liability owed Suez water has raised yet unanswered questions for Ravi Bhalla, the self-recused councilman and the mayor who aren't answering. The major question looming with less than three weeks left, will these problems overwhelm the establishment push to see Councilman Ravi Bhalla finish first?

The latest in a series of Bhalla campaign mailers is clearly a slap at City Council President Jen Giattino. While Mike DeFusco had been part of the ward council slate in 2015 endorsed by the mayor, suspicions about him and his Old Guard allegiances lingered and in short order, he proved them correct. DeFusco started on the council in 2016 and by the following spring had double-crossed the mayor and filed to run against her in May but she backed out of the race the following month.

Based on the whining hysteria directed toward Jen Giattino's burgeoning candidacy with just over two weeks to Election Day, a decision was prompted to hack away at her using the mayor as the foil.

One keen observer familiar with all the officials remarked about the mailer, "Not a shred of humility. No one but Ravi helped them." 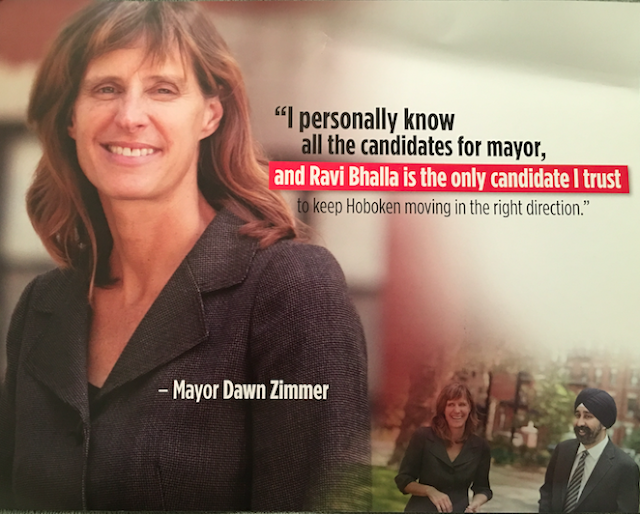 Talking Ed Note: On Tuesday, this website obtained the secret results of the Bhalla campaign's push poll. Those stunning results show Jen Giattino surged into a statistical tie for first and created a firestorm of interest, anger and personal attacks lashing out here and elsewhere by rabid Bhalla campaign backers.

After eight years, MSV sources are everywhere and so are its moles. If you want to stop a Horse, you'll need a gun. 19 days to go.
Posted by SmartyJones at Thursday, October 19, 2017
Bhalla campaign goes negative as the mayor throws former allies under the bus
2017-10-19T13:24:00-04:00
SmartyJones
Comments


Talking Ed Note: The latest bad news on the Monarch means the City of Hoboken is faced with the prospect of two towers on the northeast corner of town.

Hoboken is now left with two less than desirous appeals as its last bid hope to stop the Barry Brothers from screwing Hoboken after they reneged on fulfilling their obligation at this location for parking and tennis courts. The millions in profits they made with their cozy Shipyard deal are apparently not enough.

There's no point in blaming Hudson County Administrative Judge Peter Bariso as inferred here. He ruled under the law on the competing legal matters and he's highly respected. So what brought Hoboken to this sorry chapter?

The whole mechanism for this sad result came about with the decision by the Hoboken Planning Board to not hold an actual hearing on the matter. MSV had planned to attend that evening when the surprising word came the Planning Board assembled with a large group of Hoboken residents in attendance and the application was rejected with no hearing. This opened the door to legal challenges and the resulting decisions against Hoboken began tumbling like a wall of falling dominoes.

Ultimately Mayor Zimmer is accountable but she is not a lawyer. The mayor and/or the Hoboken Planning Board were given bad legal advice.

At this point, the prospects do not look good for stopping the Monarch.