Here is last Wednesday's mayoral forum hosted by Stevens at the Debaun auditorium.

The entire proceedings come courtesy of the Hoboken Quality of Life Coalition and is moderated by Bob Bowdon.

The breaking Saturday exclusive where a shadowy PAC is running TV adds on the Fox News Channel urging voters to vote for Ravi Bhalla continues what looks like a daily run heading to next week's Hoboken mayoral election.

The ads fronted by a PAC called "Stronger Foundations Inc." is connected to a major union with strong ties promoting NJ Transit's efforts to develop its property in downtown Hoboken.

For years Hoboken residents have fought against a plan for large scale development at the NJ Transit site featuring towering skyscrapers proposed. NJ Transit had proposed a $1 billion Hoboken and Terminal Yard Redevelopment Plan with residential buildings as high as 45 stories a 70 story commercial tower.

The proposal if implemented would destroy the character of Hoboken.

NJ Transit is also a client of Florio Perrucci, the politically connected law firm raking in millions in NJ government contracts where Councilman Ravi Bhalla is a law partner.

Previously, concerns of conflicts of interests erupted when Councilman Bhalla was questioned about Florio Perucci's work for another client, Suez water. Bhalla would later recuse himself from participating in discussions about a controversial contract put up for consideration by Mayor Zimmer. The proposed contact saw no sponsor but would rollover a $8.35 million liability into a new decades long contract.

The Bhalla campaign led by Ravi Bhalla and his council at-large slate of Jim Doyle, Emily Jabbour and John Allen support the proposed Suez water contract. The proposal did not receive a single sponsor on the City Council and has seen no action taken.

Ravi Bhalla's campaign was contacted over the weekend and asked about the PAC TV ads on Fox News its union connections and ties to NJ Transit but declined comment. 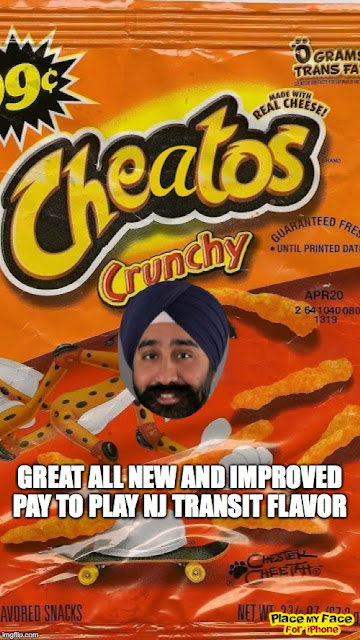 Related: The MSV Saturday Exclusive broke the story of the Fox News TV ads urging Ravi Bhalla be elected mayor by a PAC connected to a NJ union with close ties to NJ Transit and its plans for major downtown development in Hoboken:

Joshua Einstein, the independent candidate for Hoboken City Council launched another means of communicating with the voters today – a campaign video. Many campaigns have videos and Einstein’s makes good spirited fun of them by pointing out that they all take place out and about in town as if voters weren’t aware of where they lived. The video, which at a little over 3 minutes is concise and to the point, dives head on into the meat and potato issues facing Hoboken as well as the fact the Einstein has a written record of addressing said issues in depth and in print in numerous newspapers and websites.

In the video Einstein also pokes fun at some of the major mayoral campaigns for conducting never ending polling in order to identify the issues. On this Einstein stated “I believe that everyone running for mayor and the council candidates in their factions have the best intentions, but it is a bit funny that many of these campaigns are so insecure in their knowledge of Hoboken’s challenges that they have had to constantly do mass calls to residents to figure them out.” He continued, “you would think that after so many years living in our town or serving in local government they would have an idea of the issues the people care about.”

On these issues, Einstein highlighted the over-bonding that if continued will lead to tax increases, the sorry state of Hoboken’s roads, the destruction of Washington St, eminent domain abuse, the war on parking, and the high cost of living. To find out more about Hoboken’s independent candidate for City Council visit www.Einstein4Hoboken.com. On November 7, vote 1-I – Joshua Einstein!