Ravi council votes: "We come to vote in present"

As proposed by MSV a compromise candidate last year and predicted early this year: Councilman Ruben Ramos was voted by his council colleagues last night to be Hoboken Council President.

The new city council president who also has served as a NJ Assemblyman spoke of the enormous positive changes on the Hoboken legislative body in recent years where professionalism and collaboration have become the standard.

"Honestly, 90 percent of time, the votes here are unanimous... 10 percent that we'll work to get through, plug away to produce the best outcome for our 55,000 residents."

Councilwoman Jen Giattino who served as Council President the last two years was elected by her colleagues in the supporting Vice President role. Both votes were recorded as 7-0-2.  The last two are bizarre abstentions, votes of "present" by Jim Doyle and Emily Jabbour.

Councilman Mike DeFusco was voted to replace Jim Doyle to sit as the counsel designee on the Hoboken Planning Board.

For the Hoboken Zoning Board of Adjustment, former Giattino council slate candidate Jim Aibel easily was voted back on a 7-2 vote. He's joined as a regular member by Antonio Grana. Other alternates moved up a slot each.

For the North Hudson Sewerage Authority, former commissioner and councilman Anthony Soares returns to that body in a 7-2 vote.

For more on this story, please see the Hudson County View:
http://hudsoncountyview.com/hoboken-council-names-ramos-new-president-giattino-vice-president/

Talking Ed Note: Were the two Bahlla council ticket council members too confused to vote either yay or nay or did they need hankies? Talk about passive aggressive babies, SMH.

Emily Jabbour deserves time to find her voice but going along with this type of vote out of the gate is simply following a very bad script. Abstain when you have a legitimate reason as with a conflict; not because you join another in stamping their feet like a child.  Nor is voting present being "independent."

As for Doyle, do we file this under John Stuart Mill, Karl Marx or an unread chapter of council voting for dummies? Seriously Jim, "present?"

Former councilman Dave Mello appeared in public portion in support of a referendum to bring runoff elections back. He also dropped a ton of lead on his former friend Dawn Zimmer.

That's going to leave a welt.


Defamation Warning Redux: Nancy Pincus continues her jihad of lies calling council members "sellouts" for working together on the City Council, no different than since 2016 and after a single council meeting in 2018.

There is no evidence about Hoboken being harmed, no one is being Beth Mason or costing Hoboken a nickel. Her false accusations against Peter Cunningham, Jen Giattino and Tiffanie Fisher are woeful lies and a sad example of bad behavior against public servants who have worked hard for years to make Hoboken better. Sad!

This is nothing more than the sour grapes of an ELEC certified Bhalla campaign political operative who wants everything one way. In addition, she falsely claims Councilwoman Jen Giattino "paid" MSV and Councilwoman Tiffanie Fisher raised "$$$$."

MSV was paid for advertising by a number of campaigns as in previous elections. Tiffanie Fisher invited people to read MSV and join premium, there was no fundraiser. Nancy Pincus has been lying about this for months now. She's also committed false and defamatory actions previously with criminal accusations against this horse and was told to take it down and issue a retraction. She refused and needs professional help.

Retract, cease and desist! Perhaps your husband Yoshi will explain consequences to you when he's told.

DWR II: Nancy stupidly doubles down and refers to an email where the idea of raising funds for MSV was proposed but didn't go anywhere. Wasn't asked about anything on Election Day, before or since.

She's lashing out because she's been repeatedly exposed for lying, most recently on MSV and the Hoboken Resistance & Advocate over recent weeks. You know, because we supported and voted for Ravi Bhalla in previous elections but not in the last one. Many Reformers felt (and still feel) Jen Giattino was the best choice but we'll pull for Ravi Bhalla as mayor and hope he does well in his term.

As previously stated, no fundraiser occurred. 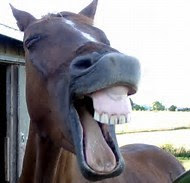 Hey, I'm a big horse and I can take it with a smile. Until I don't. Hi Yoshi.

All fundraising ideas are welcome. Contact the Horse at smartyjones@me.com.
Posted by SmartyJones at Thursday, January 04, 2018