In a stunning revelation first reported Saturday over the holiday weekend by the Hudson County View, new mayor Ravi Bhalla broke his campaign pledge committing to make the City of Hoboken his full time job as mayor.

The law firm published an announcement welcoming Bhalla to the firm.

Last year, Ravi Bhalla's law partner affiliation with politically connected Florio Perrucci became fodder on the campaign trail before he finally declared in a campaign announcement his commitment to "working full-time for the people of Hoboken, severing my employment with the firm."

Now, barely a month in office Ravi Bhalla has done a 180 on his pledge to the people of Hoboken. According to the Hudson County View exclusive, Mayor Bhalla will make less than $100,000 in his new of counsel position.

Hoboken lifestyle magazine H-Mag which typically avoids the hornet's nest of Hoboken politics issued a late Friday story calling the new Ravi Bhalla gig a "side hustle," putting a link to its story right on Bhalla's Facebook page. It's capped by an apparent snarky "Congrats!" 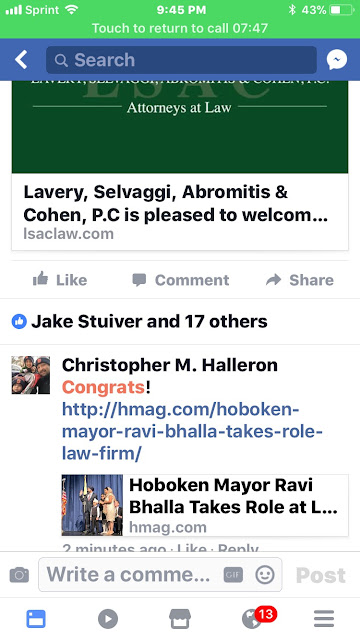 Mayor Ravi Bhalla's salary is listed as just short of $117,000, the highest salary among the 12 mayors in Hudson County.

Talking Ed Note: How many Hoboken voters who bought the bag of goods on the politically planted Ravi "terror flyer" putting him into the mayor's office will learn of this news and realize they are part of the snookered 32%?

Some residents are quietly communicating their displeasure saying Hoboken should expect more of a "side hustle" from its new mayor Ravi Bhalla. They elected not to go on the record concerned about political retaliation already evident from the Mile Square City's mayor of one plus month.

Posted by SmartyJones at Saturday, February 17, 2018