Councilman Peter Cunningham: 'Will do right by Hoboken even as Mayor Ravi Bhalla doesn't'

I am circulating the below press release to you - a small subset of my constituent list - which I sent to the media on Tuesday after having learned that Mayor Bhalla announced on his personal facebook page that he's accepted a position with a law firm in Morristown.

He's accepted a position with a law firm in Morristown?  He's the Mayor of Hoboken.

I'm sorry, but I'm not OK with this and the manner in which it was introduced was not transparent as our Mayor.  It was released late Friday of a long weekend, and I'm finding that to this day, many folks are still unaware.

Without wanting to come across as a whiner, the last couple of weeks have been challenging with our new Mayor, Mayor Bhalla.  I've also attached a couple of copies of text messages that were sent and accidently received by me that are unnecessarily politically charged against me and my colleagues.  They are arrogant and unnecessary and do not lend themselves to a collaborative relationship with the council.

While I consider these circumstances to be problematic, please don't be concerned with my actions on city council.  I will always do what's right, and what's practical for you and the City of Hoboken.  Please let me know if you have any follow-up questions or concerns. 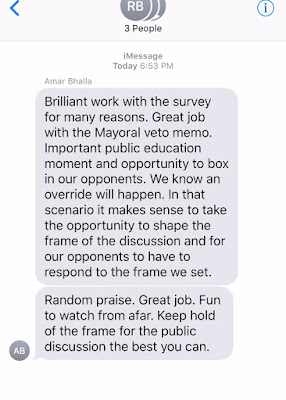 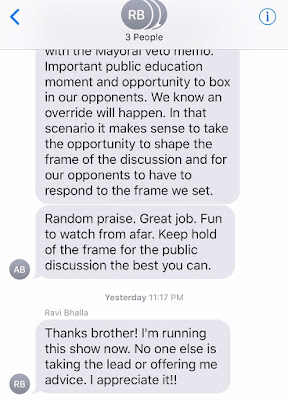 Posted by SmartyJones at Friday, February 23, 2018