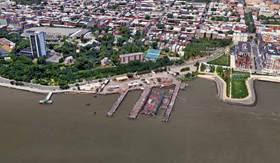 Mayor Ravi S. Bhalla has called for a special meeting of the Hoboken City Council on Wednesday, February 28th to consider authorizing the acquisition of the former Union Dry Dock property for the purpose of completing the Hudson River Waterfront Walkway within Hoboken and for public open space and recreation. The meeting will begin with a closed session at 6:30pm in City Council chambers.

"Our community's decades-long vision for a continuous, public waterfront park is finally within reach," said Mayor Ravi S. Bhalla. "I thank all of the elected officials and advocates who have put so much time and energy into protecting our waterfront and look forward to completing the transformation of our formerly industrial waterfront into a world-class park system."

Talking Ed Note: The mayor's office and Mayor Ravi Bhalla have repeatedly called Union Dry Dock "a victory" but the truth is the situation remains more in limbo with NY Waterway holding the upper hand. Giving the public false expectations is apparently the new law of the land.

It will take some time to see what is tenable with the Union Dry Dock property but the City of Hoboken isn't in the best position, public optimistic  pronouncements aside.

Additionally, the acquisition costs of the property if possible would be dwarfed by the additional compensation costs such as moving the business.
Posted by SmartyJones at Monday, February 26, 2018