Online threats later by alleged tenants and their friends say the action may lead to legal action taken against the City.

MSV in this exclusive report has pieced together many of the facts leading to the party's being issued a summons for disorderly house.

Magee Hickey of WPIX 11 filed this report and spoke to two of the four tenants who saw their house party shut down. One woman tenant said she didn't "understand" why there was any problem as each of the four roommates had invited "8 or 9 friends to their party."

Another tenant admitted in the interview they "created some sort of nuisance I guess."

Feelings about the party being shut down changed at some point. Online, the alleged tenants and their friends have begun making threats of legal action against the City of Hoboken for their bash with dozens being shut down.

One alleged Millennial-tenant offered this threat online to Hoboken saying he's a lawyer and the "city is going to regret what they did today."


MSV has collected some details to the story and it does not fit the narrative being offered by the Millennial-lawyer and other alleged injured partygoers online. Attempts to see the tenants comment on their story were ignored.

According to well-placed sources, a complaint Saturday afternoon by a young Hoboken resident near the scene was made to the Hoboken police. The number of people in the unit above was thought a possible danger to the ceiling and restaurant below.

Four Hoboken police officers in regular uniforms went to the door of the house party, knocked and asked to speak to a tenant of the apartment. No rifles or SWAT unit appeared and no Glock-issued guns were drawn. With music blaring, a person answering the door attempted to slam the door in the face of the officer who managed to keep the door wedged open.

No Hoboken police officer entered the apartment at any time with estimates of up to three dozen people inside. A disorderly house summons was issued and the party-goers eventually peacefully filed out.

But another twitter commenter attempted to portray the incident as an overblown unwarranted reaction featuring threats to party-goers. The Boken twitter account requested any photographic evidence. None however, was offered. 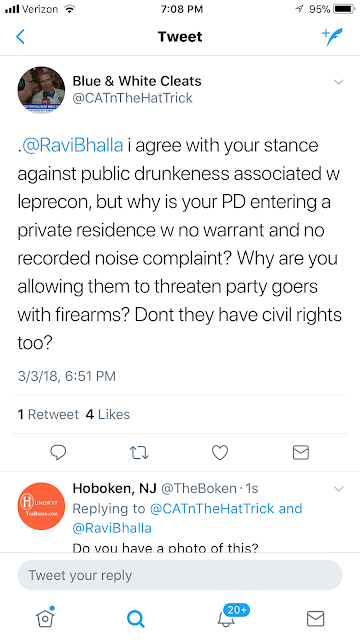 Hoboken Police Chief Ken Ferrante offered a written response to the complaint and action taken by the Hoboken Police on the scene and invited anyone with evidence to submit it. "We have not received any video or pictures at this time from anyone who witnessed the event; either from inside the building, bar or the outside. I welcome and respectfully request that anyone who may have a video to please send them to our Internal Affairs so we can review."

The summons will see an appearance before Judge Michael Mongiello in Hoboken Municipal Court where the tenants will face charges of Disorderly House with a fine of up to $2,000.

Talking Ed Note: Additional efforts for comment from the alleged tenants failed to obtain a response. It doesn't appear this story will lend itself to these Hoboken Millennials making a case to join the "Greatest Generation" of Americans who fought in World War II.

All the evidence is apparently not collected but when it is, the idea of a lawsuit against the City of Hoboken may prove foolhardy.

Full disclosure: MSV previously had exchanges with the alleged lawyer tenant who days ago supported Mayor Ravi Bhalla and dismissed reports here his second job law firm employment contract is a big deal. How the worm has turned.