Ravi on the brink?

The revelation of how Ravi Bhalla subjected a former employee to years-long abuse as the NJ Supreme Court wrote he failed to take "any substantial steps" to see the employee paid over $6,200 shocked many.

Among those shocked are the hardest core supporters, Ravibots! 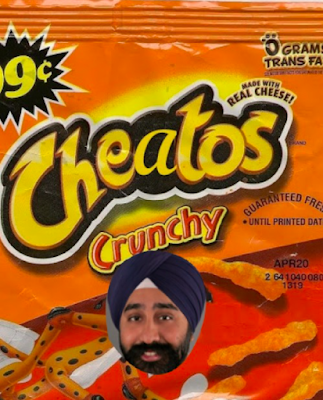 Is this failure to keep a promise and return the money until 2016 and 2017 the following year after an August 2015 grievance was filed to see the monies returned a mere symptom due to lacking a bookkeeper or something closer to a harsher reality?

The latest Ravi Bhalla scandal comes on the back of the City Council seeking transparency on the mayor's second job.

The Jersey Journal further covered this aspect of the story:

Members of Hoboken's council want Mayor Ravi Bhalla to report regularly on his earnings and clients at his second job.

On Friday, the mayor released a memo stating "in the spirit of transparency and collegiality," he announced delivering one new client to the Republican law firm, Lavery Selvaggi, Abramovitz & Cohen this year.

According to Mayor Bhalla, he hasn't been paid any commissions to date for the one client landed. He, however, failed to point to the employment contract of the second job where he has not covered in new business delivered to date the $60,000 base salary before commissions are paid as stipulated in the agreement.

The mayor's memo listed a dozen items - what he called his "track record." The first item listed is "paving and rehabilitating Washington Street to 9th street "by mid-July," a date in the future. The memo then stated Bhalla has "not required the participation of the City Council," a shot likely to only further alienate most on the nine-member body that has approved the vast majority of Administration requests to date.

The City Council does not appear likely to end its efforts seeking a formalized process of quarterly updates on Bhalla's commissions, earnings and client contracts in the face of his sudden announcement after months of obstinacy to their previous requests.

While many in Hoboken are only learning of Bhalla's NJ Supreme Court censure and don't know the complete unseemly details, insiders have and several voiced strong displeasure.

Their answers range, depending on confirmation bias to completely overlook the implications of Bhalla's former employee not paid monies requested and owed for almost seven years to outright "disgust," and worse.

One close observer who thought Bhalla the best among the mayoral choices last fall noted, "if people knew about this during the election, no one would have voted for him."

Other insider comments were harsher and are not published due to foul language. No one wanted to be quoted on the record either way.

At Sybil's Cave, Ravi Bhalla's fanatical paid political operative host avoided addressing any substance of the NJ Supreme Court's censure of Ravi Bhalla. When a reader asked if anyone would comment about "the lasted Ravi scandal" they were urged to stay on topic and stick to an attack on council members.

Former Hoboken mayor Dawn Zimmer, who last year declared Ravi Bhalla the "only" mayoral candidate she trusted has not been heard from since the news broke last week of the NJ Supreme Court's censure of Ravi Bhalla.

During the mayoral race, Zimmer actively campaigned for Bhalla and offered him her unqualified endorsement. Her husband, Stan Grossbard worked on the Bhalla for Mayor campaign. Neither responded on the record to the substance of the Bhalla censure by the NJ Supreme Court or when they learned about the case.
Posted by SmartyJones at Monday, June 25, 2018