Grist for the Mill: Forging ahead back to City Hall?

The whispers are growing about a shakeup in the Hoboken mayor's office. The blowback from the election where Joe Crowley in Queens went down in the primary reverberates and his campaign manager may be eyeing a return to Hoboken

Something has to give if forging ahead means returning back to Hoboken City Hall. The idea is not popular upstairs in City Hall and there may be an exodus, a voluntary one, to escape. The revolving door may help ease the overcrowding.

The Hudson County Board of Freeholders is set to hold its monthly meeting on Thursday and the county's approximate $20 million agreement with the federal government for facility usage housing ICE detainees will be a focus.

The takeover by the regressive Alt Left of the Democratic Party is in full swing and both Jersey City Mayor Steve Fulop and Hoboken Mayor Ravi Bhalla are dueling to protect arrested constituents, voters, and/or residents who found their way here forgetting their documents at home. Under US law, those arrested for a variety of crimes, many serious, also happen to be classified under the decade's old term illegal aliens. 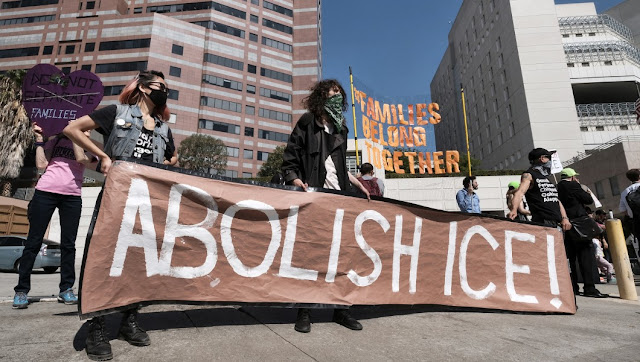 Should be lots of noise, yelling and wailing but for the officials who come to grandstand, none will be mentioning their personal conflict with their sworn oaths to uphold the NJ and US Constitution.

ICE, founded after the 9-11 attacks is charged with protecting US residents and among them, children caught in human trafficking rings. Its efforts against human trafficking impact an industry left unchecked at the US southern border where fully 25% of the sexually abused victims are children.

President Trump proclaimed January National Slavery and Human Trafficking Prevention Month. Someone should get that memo to the officials who refuse to recognize it.

More than 2,300 suspected online sex offenders were arrested as part of Operation Broken Heart last June but you would be hard pressed to find any media coverage.

Grist for the Mill is MSV's rumor column. More on today's Grist in MSV Premium. For that or last week's issue, email smartyjones@me.com.
Posted by SmartyJones at Monday, August 06, 2018