Hoboken Council Votes to Cancel Contract for Law Firm Representing Bhalla in Ethics Complaint Appeal
The City Council voted 7-2 last night in favor of a resolution that cancels a contract for a law firm that had been representing Mayor Ravi Bhalla in an appeal of an ethics violation that was upheld by the Local Finance Board in November 2017, just days after Bhalla was elected as Mayor. The ethics complaint was originally filed against Bhalla by a resident in 2010 after the then-Councilman voted for a city contract for an attorney with whom he shared an office lease. Council President Ruben Ramos and Councilman Mike DeFusco issued the following joint statement:

"Last night the City Council voted overwhelmingly to protect Hoboken taxpayers by stopping Mayor Bhalla from continuing to use city resources to defend himself against a personal ethical violation. This has gone on for eight years and it's clear that the Mayor's lack of candor when the situation first developed led the city down a path of being unfairly forced to foot the bill for Bhalla's indiscretion. That misuse of taxpayer funds needs to end and we're glad to see the City Council continue to act as a watchdog on this administration."

Local Finance Board violation is attached as a snapshot below from the State of NJ, Department of Community Affairs. 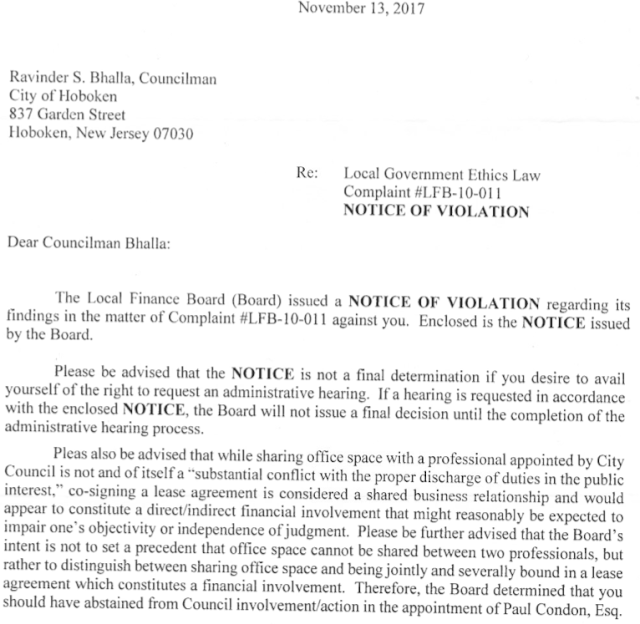 Posted by SmartyJones at Thursday, August 02, 2018