According to tallies posted on NJ.com, the Hoboken BoE will see victories for Ailene McGuirk joining Tom Kleupfel and Malani Cadematori leaving incumbent John Madigan out of a slate win.

The chart tells the story: 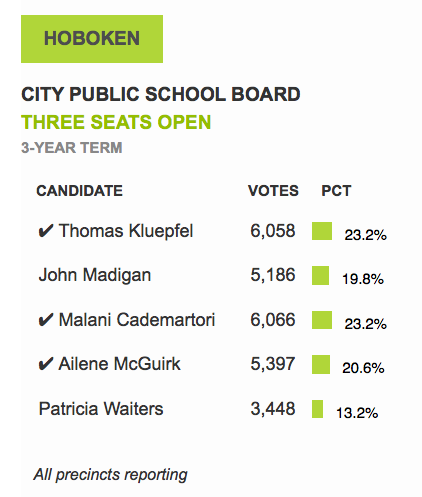 Vote-by-mail tallies late are not expected to alter the results.

In the NJ Senate race, New Jersey lived up to its reputation as a national laughingstock or perhaps reached new lows with the re-election of its corrupt Senator Bob Menendez in the midterm election. With higher turnout spurred by the constant post-inauguration warring and in the battle of President Trump campaigning for major US Senate races versus the aligned forces of the media and Democrat Party; Menendez easily bested newcomer pharma exec Bob Hugin. While the result was not as close as some projected, the narrow lead in the US Senate for Republicans widens substantially to the mid-50s.

When the Cook Political Report and others shockingly moved the NJ Senate race into tossup, millions had to be diverted to save Menendez. While those millions proved effective, they cost Senate seats elsewhere as every competitive Democrat Senator who voted against Supreme Court Justice Kavanaugh's confirmation went down to defeat.

Other media hyped races by the Democrat media failed to achieve their objectives in Texas where Ted Cruz saw re-election and Florida where both the governor and senate seat went to the Republicans.


The Congress, projected to turn in the historical midterm shifts saw nothing by way of the much-hyped self-proclaimed Blue Wave. The Associated Press reported in the middle of the night the House majority is turned by a sliver likely putting Nancy Pelosi into the Speaker's chair.

But it was Fox News, targeted by many as being the sole "opposition" media that called the Congressional races nationally without votes counted in numerous elections and voters at the polls in Arizona, California, Oregon, Montana* and Washington. Shades of media election interference in 2000 with voters having an hour of voting remaining in Florida. Expect that election "interference" to generate major controversy as it may have in fact won the House for the Democrats.

That little Murdoch family globalist play will be a major post-election issue.

You would think it a Deep State plot but like the polling, the "errors" are consistently generated in the same direction. There's going to be significant issues surfacing as the dust clears on the phony Russia Collusion Hoax among other serious criminal matters.

* Montana has since updated its vote totals putting incumbent Jon Tester into first.
Posted by SmartyJones at Tuesday, November 06, 2018