When you are facing some alleged "political" threat, what's better than having your very own taxpayer paid, tricked-out 2018 Ford Expedition with chauffeur "bodyguard" to spire you around the dangerous Mile Square City hood and the eight blocks daily to City Hall. 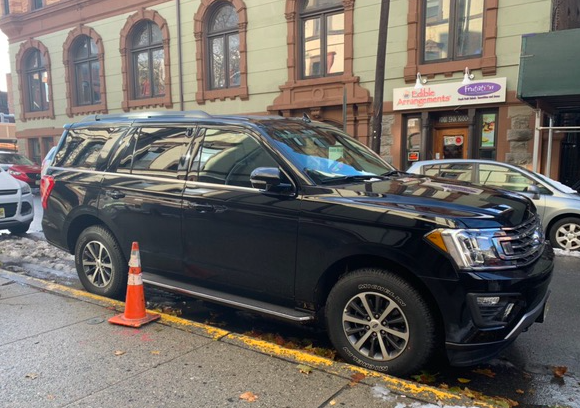 Update: Late Friday, Hoboken Police Chief Kenny Ferrante offered some additional background on the above vehicle with the following details.


The Hoboken City Council early in 2018 authorized and budgeted this SUV as part of five vehicles purchased for the police department.

A large, black Ford Expedition SUV, luxury with a police package for the Hoboken Police Investigations Bureau is used for dignitary protection, moving of individuals in confidential situations, transporting of special victims and families of victims and the Mayor’s Security Detail.

Talking Ed Note: Well all of HudCo does it so... Hoboken taxpayers will have to decide on the justification for this SUV and the attached costs of the security detail. Is it truly warranted?

Mayor Ravi Bhalla used this SUV for his jaunt to Atlantic City and its annual League of Municipalities; chauffeured "security" along for the ride.

Correction: This vehicle may seat only 8 maximum.
Posted by SmartyJones at Friday, November 16, 2018