Councilwoman Jen Giattino: "City Hall is now being run as a political operation"

At last week's City Council meeting, Council VP Jen Giattino returned from a brief chat outside the chambers during public portion to hear a trail of vindictive pus oozing from the resident microphone at Councilwoman Tiffanie Fisher.

In the strongest public statements in her seven years as a councilwoman, elected three times by her council colleagues to lead the nine-member group as City Council President since 2011; Giattino lambasted the ugly race-baiting attacks against Councilwoman Tiffanie Fisher and pointed to their evidenced origin out of the Hoboken mayor's office.

"City Hall is now being run as a political operation," the two-term councilwoman stated matter-of-factly before adding, "instead of a governmental one."

Those remarks, low-key but devastating undressed Mayor Ravi Bhalla and the gutter mudslinging out of the mayor's office.

Giattino called up Patrick Wherry to discuss the details of an agenda meeting to remove a resolution to see Chris Brown appointed director replacing Brandy Forbes and allow council members a chance to meet with him "following protocol;" as the City Council President would allowing all its members of the council to meet with the candidate.

That meeting took place on the Thursday prior to last Wednesday's council meeting at 5:30. A mere two hours later, Giattino noted that Councilwoman Tiffanie Fisher was being attacked and called racist online.

Noting that Councilwoman Fisher didn't even attend the agenda meeting, Giattino pointed to the obvious source of the race-baiting attacks that have followed on Ravi Bhalla's paid political operative website and others, most recently, this one.

"Whoever Patrick reported to (in the mayor's office) after that is clearly the person that started spreading this word. And I think it's so so rude to Chris Brown to put that out there... How do you think he's feeling about this? This is disgusting."

Giattino concluded by pointing the finger directly at the Ravi Bhalla Administration for launching this race-baiting attack against Councilwoman Tiffanie Fisher and saying both the councilwoman and Chris Brown were owed an apology. Some of her remarks appear below:

A reader submitted evidence from the political operative website where Ravi Bhalla runs his paid political operations. Even loyal campaign supporters back to the days of former mayor Dawn Zimmer have publicly, and loudly, begun bailing. Here is the first submitted instance and apparently all of it appears to the present on Nancy Pincus' cult of personality website on behalf of Ravi Bhalla: 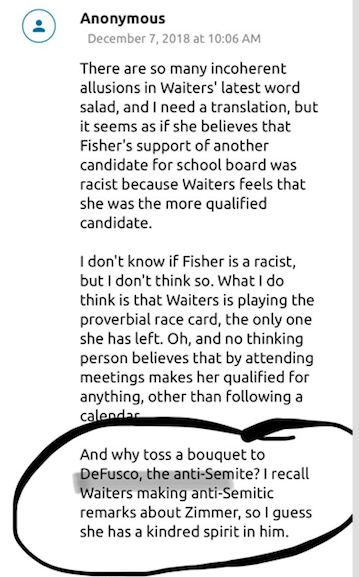 Talking Ed Note: Does any of this give the Hoboken public pause and insight into who's behind the Ravi Terror Flyer? Look at all of the evidentiary revelations going from the Hoboken City Council Chambers and leading foursquare into the Hoboken mayor's office for the clues.

If we could only point to the list of unseemly actions and revelations since January as an abject disappointment.

You are so much worse than a disappointment Ravi.

Posted by SmartyJones at Tuesday, December 11, 2018