The Hoboken Horse at MSV can exclusively report the pending decision from the US Army Corps of Engineers came in and NY Waterway may commence full commercial operations at the site of the former Union Dry Dock.

It's unclear for the moment when exactly the decision came down but reliable sources inside City Hall confirm the unified fight among many in the city from Mayor Ravi Bhalla, Council President Ruben Ramos, Councilwoman Tiffanie Fisher on down to community activists is lost. 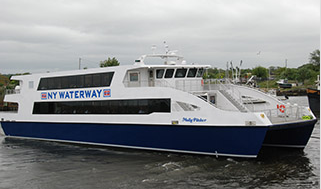 Talking Ed Note: After former mayor Dawn Zimmer completed her second term, there was a discussion in the community to obtain the Union Dry Dock site and add it to the public waterfront.

This all but confirms what some close political observers had anticipated. NY Waterway has the green light to continue work and begin its commercial operations at the former Union Dry Dock site.
More on all this to come.

Posted by SmartyJones at Friday, December 07, 2018