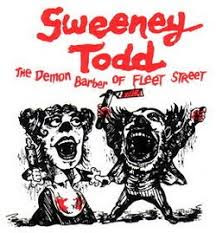 It was the barber on Jackson Street by way of Camden and south Jersey who got Beth Mason the appointment to a seat on the Hoboken Housing Authority.

If not a full Sweeney Todd production, a reliable source at the state level says "Sweeney was the one who got her (Beth Mason) the appointment. The favor was for Sweeney."

The reference is to the powerful southern NJ State Senator Steve Sweeney (D-3) who also serves as the state majority leader.

For years, Beth Mason funded the political aspirations of the powerful State Senator's and would host parties in Atlantic City during the annual League of Municipalities conference.

Mason pitched herself as a Lt. Governor on a potential Sweeney bid for NJ governor. However, the eventual expectation of a run for governor never occurred as Phil Murphy, the former Ambassador to Germany and a well-off former player at Goldman Sachs exerted his financial capabilities on key Democratic county chairs.

The entry of Murphy vying for governor on the Democrat line forced Sweeney to rethink entering the race. He would decline after another potential rival, Jersey City Mayor Steve Fulop announced he would support Murphy's gubernatorial bid and forgo one of his own.

Senator Sweeney had been a sometime ally of the outgoing Governor Chris Christie and built up a good working relationship. In the end, all the vast expenditures by the Mason family purchased not a path out of Hoboken but back to it in the form of a seat on the Hoboken Housing Authority.

Talking Ed Note: While a contribution to the state effort against opioid abuse is welcome, it's not the driving force in the appearance of Beth Mason onto a seat in the HHA.

She's back! The terror of Beth Mason descends on the HHA as she reenters Hoboken politics

The following is MSV analysis/opinion on the breaking news of Beth Mason's reentry into Hoboken politics.


The first question on everyone's minds; what contribution did the Mason family wallet make?

As part of a slew of gubernatorial appointments, Gov. Chris Christie appointed the notorious and destructive Beth Mason to an open seat on the Hoboken Housing Authority. Some speculate the price was a hefty contribution to Gov. Christie's campaign against the far-reaching impact of opioid abuse in New Jersey.

The Hoboken Housing Authority seat, one of seven was open for well over a year and is appointed by the sitting NJ governor.  On his way out the door, Gov. Christie who once allied with former mayor Dawn Zimmer and then became partisan opponents in 2014, gets the final parting shot.

Held in abeyance by the now defunct Hoboken Reform Movement, the appointment of Beth Mason to the Hoboken Housing Authority likely means a political power play to see her assume control over the board there and follow with her resuming attempts to obtain elected office. She's failed twice to be elected Hoboken mayor and other avenues sought such as NJ Assembly and Lt. Governor closed.

Mason allied with former HHA Executive Director Carmelo Garcia who left the agency in shambles in 2013 and ruled with an iron fist over a banana republic fiefdom. Garcia is pending on final HUD approval on a $700,000 payout settlement for his "ethnic cleansing" civil lawsuit where he claims he was victimized when his five year contract was terminated.

Back in 2013, it was former Councilwoman Beth Mason who stood at the front of the council chambers as a mob almost took over the room in an attempt to stop a vote terminating Carmelo Garcia's contract. (This editor was a target of the mob and theft close to full-scale rioting as Mason looked on in silent approval as seen below.)

The video is now simply known as The Fracas.

Mason had tried to use her seat on the city council and her family wallet to leverage the HHA population for higher office while keeping them under the thumb of Garcia. Now she returns holding one of seven HHA board seats.

Beth Mason who acted as the wallet funding the worst Old Guard political operations against Hoboken, (trying to shut down the hospital in 2011 being one) resumes a public office and becomes a Hoboken political personality. She's likely aiming to buy her way up the political ladder in Hoboken if not Hudson County or beyond.

Once again, a casualty of the Hoboken Reform Movement being detonated by the back room deal between Dawn Zimmer and then councilman Ravi Bhalla last year will see the most vulnerable population of Hoboken pay the price.

It will not end there.

Talking Ed Note: Beth Mason was not contacted for this opinion piece. Her most recent public appearances in 2016 surrounded her phony criminal charges against MSV thrown out of Jersey City Municipal Court mid-trial.

The judge ordered a continuation of mutual no-contact between the parties:
Beth Mason criminal charges against MSV thrown out of court as First Amendment rights preserved.

Related: The inside story with emails obtained in litigation with the plot to destroy the hospital and the Zimmer administration.

The Hoboken Resistance & Advocate takes a view on the shocking news.