On Tuesday, Councilwoman Jen Giattino focused on that second job and pointed to his written campaign pledge if he became mayor he would "be working full-time for the people of Hoboken, severing (his) employment with the firm."

She states "he has failed to keep that commitment."

Ravi Bhalla did sever his law firm  relationship with that law firm at the end of 2017. Then a mere month into office, he's officially begun another, potentially far more lucrative law firm position as a rain maker in an Of Counsel law job. 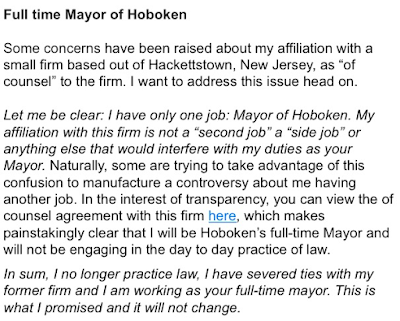 In the statement, Ravi Bhalla doesn't even mention his employment contract with a law firm, any law firm. The ink is barely dry on the new law firm contract and he's in full cover-up mode denying its impact and that it's a second job paying likely far more than his 117K salary as mayor of Hoboken.

He says this won't interfere with his duties as mayor even while it'll certainly more than supplement his earnings if not supplant those being mayor.

As seen in the law firm contract with Lavery Selvaggi yesterday, Ravi Bhalla stands to make hundreds of thousands or a million plus based on the uncapped commission structure.

The law firm employment contract itself has likely been rewritten for public consumption prior to release. There's likely an earlier version the public hasn't seen. The evidence? There's conflicting dates on the letter, February 16th and February 22nd. In addition, Ravi Bhalla's signature on the letter shows no date of execution nearby, a standard legal practice. This has the earmarks of a hasty second effort.

In the Monday release, Ravi Bhalla claims that his law firm employment contract where he'll be paid megabucks to make it rain at the law firm, work toward "mentoring" associates and providing strategy means "I no longer practice law."

Ask any lawyer about any aspect of Ravi Bhalla's employment responsibilities listed in the law firm's employment contract letter and see if they agree he's not in the business of practicing law.

Talking Ed Note: The only reason these PHAT law firm contracts are handed out in the Soprano State has everything to do with influence held over public office, not for mentoring a couple of associate lawyers or offering "strategy" over lunch or dinner.

The potential for conflicts of interest in outside law work were obvious during the campaign and I raised it. Mayor Bhalla answered both my concerns and residents with a strong pledge. Promising to leave his law firm if elected and promising "But the most important information going forward is that if I am elected Mayor, I will be working full-time for the people of Hoboken, severing my employment with the firm.”

He has failed to keep that commitment.

He also promised to stand up to President Trump in particular, and hatred in general. Yet when choosing which law firm to lend his name to, he chose Lavery, Selvaggi, Abromitis & Cohen. A Republican firm, previously known as Courter, Kobert and Cohen. Yet the Courter is the same Jim Courter who stated, "An avowed homosexual should be screened so that they do not affect negatively impressionable youth.'’ Jim Courter continues to work for the firm as 'Of Counsel’ the same title as Mayor Bhalla.

We need to find ways to protect the character and scale of Hoboken’s residential neighborhoods. Under current law we are treating non-flood zone areas like they are flood zones for no good reason and with devastating impact on our housing stock. On March 7th, I will offer an amendment to Hoboken’s flood ordinance removing the X and shaded-X zones from the enforcement area. We are seeing far too many facades change and losing the connection between our sidewalks and our homes. Removing these 2 zones from enforcement is just a start.

Description on X and Shaded-X Zones

As always reach out with thoughts and concerns,