Stacking the Deck at the Hoboken "Democratic" Committee

The mad scramble for the Hoboken Democratic Committee tonight has everything to do with the lust for power and absolutely zero to do with transparency or a competitive electoral process. This one is about as insider as it gets.

How many committee seats will be filled tonight? You can't pry the information out of the HDC and the plan to fill them with solitary candidates for each if you shoved its Executive Committee members into the jaws of death.

Not a single seat will be contested and no one will be invited to campaign for votes within the body; this is a strictly closed non-electoral process.

If any of this lacks the feel of Reform transparency, well, it isn't. This is HudCo politics in Hoboken. Start liking it! 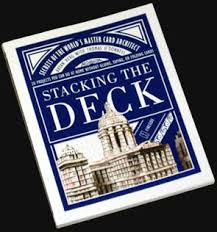 There's plenty on the line and the stakes are high. For Hoboken, as stated earlier this week in premium, it's a lose-lose proposition. Hoboken will be plundered with regular double-digit tax increases no matter the outcome.

Mayor Ravi Bhalla is keen on playing lowbrow partisan politics against President Trump who wouldn't know him from a hole in the wall but fighting HERE for Hoboken against the HudCo tax and spend machine?

Tonight's meeting is all about the political ambitions of the big powerhouse dual officeholders, their respective HudCo allies and loyal Ravibots. The singular push for power is paramount above all.

In addition to the new seats open courtesy of former mayor, Dawn Zimmer, and her husband Stan Grossbard stepping up last month then stepping down this month; there are additional seats to stack, pardon the pun.

There are several seats open due to committee members leaving Hoboken and at least one seat in the Hoboken Housing Authority is in desperate search of a warm body. The order from the Hoboken mayor's office is to find those bodies who will do its bidding.

Then the first order of business will be to see those warm bodies vote next month for Brian Stack.

Ravi Bhalla's political ticket out of Hoboken may rely on it.