"The city should certainly be doing more to support local artists and Mayor Bhalla's proposal to allocate one percent of the city’s debt to arts is intriguing, but this announcement leaves more questions than answers as to how the program would actually be implemented and administered. This is the first that members of the City Council have heard about this and it's disingenuous how Mayor Bhalla continuously claims that Council members won't work with him and then throws out a completely vague program with no Council or community discussion. The Council takes bonding and the expenditure of taxpayer dollars very seriously and that's why this necessitates a careful review of debt spending, however, I look forward to working with the administration to elevate the arts as a priority across Hoboken."

Related: The Jersey Journal published a story on Mayor Ravi Bhalla's latest executive order diverting bond ordinance funding to "the arts" up to a million dollars in his term.

'First Amendment expression for the rule of law is no crime'

Councilman Ruben Ramos is abusing his position on the City Council. His public attempts at bullying a member of the community for having a point of view he disagrees with is infantile and his willingness to leverage his position as an elected representative is demonstrable evidence he lacks an understanding of the basic rights all elected officials swear to uphold. Even worse is the fact that his chosen target is a community volunteer who spends his private time on an unpaid public board serving the most underprivileged residents of our city. This man is Hovie Foreman and juxtaposed his apolitical service-driven commitment to the community is Ramos’s taxpayer-supported quest for greater attention - now at the expense of freedom of speech. 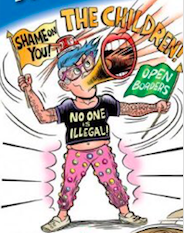 Forman is being persecuted for expressing his views on illegal immigration on his personal Facebook page. Ramos has stated that Forman has “decided to echo false Trump talking points and attack children.” Yet, were Ramos aware of recent history he would know the national discussion on child immigrants crossing the border illegally, and only declaring asylum once apprehended, has been struggled with prior to the Trump administration. In fact, despite Ramos’s attempts to deploy illegal immigration as a wedge issue dividing American’s, there are many Democrats who know how complex of an issue it is. As a Democrat, Hoboken City Council member, and former NJ State Assemblyman, Ramos should remember the words of former Democratic Presidential Candidate Hillary Clinton, who in a 2014 interview with Christiane Amanpour, argued both for amnesty for longtime illegal immigrants who are integrated into American society and against letting child immigrants stay in our country because “we don't want to send a message that is contrary to our laws or will encourage more children to make that dangerous journey.”
Not one to let an opportunity to divide Hobokenites go un-abused, Mayor Bhalla chimed in that Forman’s perspective on illegal immigration, shared by 54% of likely voters according to a recent Rasmussen poll, “calls into question his ability to represent the constituency he serves as a commissioner. Hoboken is and remains a fair and welcoming city for all.” This is despite the fact that illegal immigrants are prohibited from living in public house projects such as the Hoboken Housing Authority unless they have a legal resident or citizen family member living there.
Surely, if the immediate former leader of the Democratic Party believes the topic of illegal immigration is one both of nuance and deterrence, Ramos and Bhalla should back away from totalitarian tantrums aimed at fellow citizens over a difference of opinion. Moreover, attempting to claim a simplistic moral high ground rejected even by their party’s most recent standard-bearer, shows how out of touch and hyper-partisan Ramos and Bhalla are. In their respective anti-free speech word vomits, both elected officials purposefully conflate support for immigration law with being anti-poor and ignore the fact that the unskilled labor illegal immigration provides, often at below the legal minimum wage, economically knee-caps the underprivileged Americans they pretend to care for.

Both Ramos and Bhalla may claim to be defending the Hoboken Housing Authority (HHA) residents but the reality is that they both voted Forman onto the HHA board not very long ago in 2016. Since then, Forman has served both the HHA residents and the Hoboken community by volunteering his time to make people’s lives better. Both Bhalla and Ramos should be admonished for their hysterical and counterfactual attempts to caricature Forman, a community leader who believes in public service, into a strawman they can huff and puff against in order to earn cheap political partisan points. Ramos, in particular, should be ashamed of his fascistic demand that one either agree with him or be purged and should be embarrassed for taking advantage of his political position to attack free speech.

Related: Today the US Supreme Court affirmed the presidential travel ban and the rule of law.
Posted by SmartyJones at Tuesday, June 26, 2018
'First Amendment expression for the rule of law is no crime'
2018-06-26T09:00:00-04:00
SmartyJones
Comments