Ravi Bhalla aims for massive across the board parking fine increases

Mayor Ravi Bhalla is seeking major increases in Hoboken parking fines. The City Council meeting tonight will see the matter before them but is less likely to be receptive to the massive increases he seeks.

With only two of nine council members ready to rubber stamp the increases in Jim Doyle and Emily Jabbour plus Michael Russo who has an "understanding" with Ravi Bhalla; there's likely no two additional votes available for passage.

The proposed parking fines sought by Ravi Bhalla are detailed below: 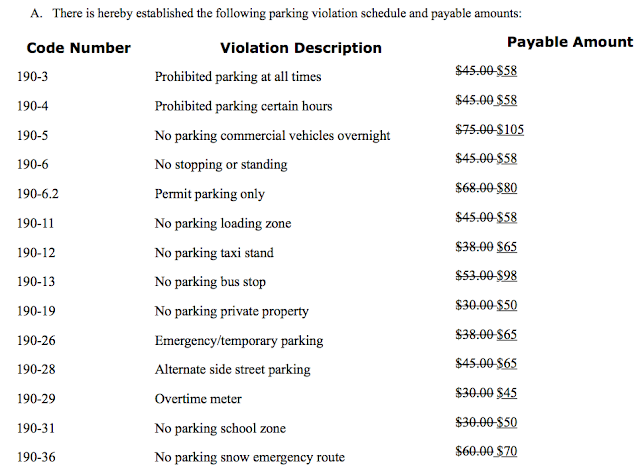 Talking Ed Note: Put this related tax hike increase into the "never let a sleepy summer time opportunity go to waste" category. The major parking fine increases presented are designed to be slipped past the goalie when no one is looking.

Dear friends and neighbors:
Tonight, among many other things, I am sponsoring and the council will be voting on a temporary new dog run to be added into Harborside Park.  This will be the end of the field that is along the western edge adjacent to Park Avenue, with the entrance being on the inner sidewalk.  The size of the run would be no more than 20% of the field.

Posted by SmartyJones at Wednesday, August 01, 2018