NEWARK, N.J. – A former candidate for the Hoboken City Council and a campaign worker were charged today by a federal grand jury with conspiracy to promote a voter bribery scheme by use of the mail, U.S. Attorney Craig Carpenito announced.

Francis Raia, 67, of Hoboken, New Jersey, was a candidate for city council in 2013. Dio Braxton, 43, of Hoboken, worked for Raia’s campaign. A federal grand jury charged them today with conspiracy to violate the federal Travel Act for causing the mails to be used in aid of voter bribery, contrary to New Jersey state law, during the 2013 election. Lizaida Camis, a conspirator, was charged by indictment on Oct. 17, 2018; her case is pending.

According to documents filed in this case and statements made in court:
Under New Jersey law, registered voters are permitted to cast a ballot by mail rather than in-person. To receive a mail-in ballot, voters must complete and submit to their County Clerk’s Office an Application for Vote By Mail Ballot (VBM Application). After the VBM Application is processed by the County Clerk’s Office, voters receive a mail-in ballot.

From October 2013 through November 2013, Raia instructed Braxton and other conspirators to pay certain Hoboken voters $50 if those voters applied for and cast mail-in ballots in the November 2013 Hoboken municipal election. Conspirators provided these voters with VBM applications and then delivered the completed VBM Applications to the Hudson County Clerk’s office. After the mail-in ballots were delivered to the voters, the conspirators went to the voters’ residences and, in some cases, instructed the voters to vote for Raia and in favor of a ballot referendum that Raia supported relating to rent control. Conspirators promised the voters that they would be paid $50 for casting their mail-in ballots and told them that they could pick up their checks after the election at Raia’s office in Hoboken. Bank records show that voters living in Hoboken received $50 checks from an entity hired by Raia’s political action committee.

Raia and Braxton each face a maximum penalty of five years in prison and a $250,000 fine on the conspiracy charge.

U.S. Attorney Craig Carpenito credited special agents of the FBI, under the direction of Special Agent in Charge Gregory W. Ehrie in Newark, and special agents of the U.S. Department of Housing and Urban Development, Office of the Inspector General, under the direction of Special Agent in Charge Christina Scaringi, with the investigation leading to today’s indictment.
The government is represented by Assistant U.S. Attorney Sean Farrell of the U.S. Attorney’s Office’s Special Prosecutions Division and Assistant U.S. Attorney Rahul Agarwal, Deputy Chief of the Criminal Division.
The charges and allegations in this indictment, and against Camis, are merely accusations, and the defendants are presumed innocent unless and until proven guilty.

Sign of the Times: Majority vote preference with runoffs surge in Hoboken

Ballot question in Hoboken to be decided on Election Day 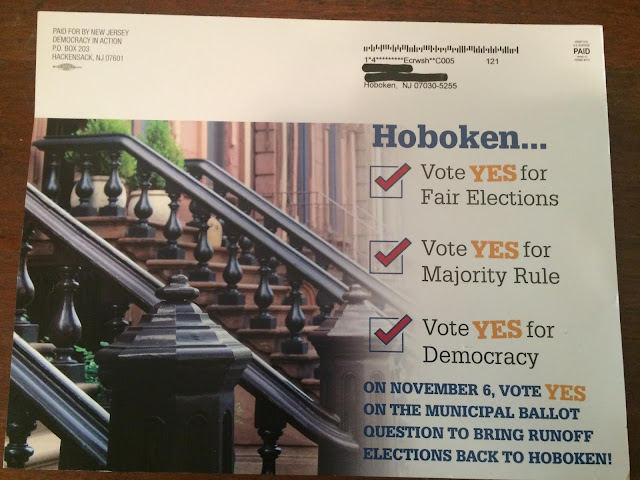 Mailers hitting Hoboken residents urge support for a ballot question to bring back runoff elections and with it, majority rule in our municipal races.

In opposition to runoffs elections being approved at the ballot box are the supporters of Mayor Ravi Bhalla and Ravibots; those who will say just about anything, deny the truth, reality or a fact if it serves his political interests.

Since the controversial and ugly mayoral election last year, arguments about runoffs have been constant with Ravi Bhalla and his insiders being deeply fearful of its potential return. Does his having waged a scorched earth campaign against friend and foe winning with 32% of the vote have anything to do with it?

The usual Ravibot arguments are all self-serving and disingenuous. They proclaim fear of voter fraud although the potential impact for voter fraud impact is far greater in a large field of candidates in a winner take all race. Notwithstanding the US Department of Justice finally made Hoboken a priority and is currently working on a conspiracy case against voter fraud in the Mile Square City.

Voter fraud in Hoboken is on the run but the Ravibots won't tell you that. (Thank Horsey later.)

The other argument typically badgers residents about a falloff in the second round of balloting. However, with Vote-by-Mail options and long hours with the polls being open, the real actual evidence for any drop off is low information voters are not so easily led by the nose a second time. In Jersey City, a council race was decided by a hard-working candidate, James Solomon, who came from behind for a runoff victory.

Isn't that what democracy is all about? Fighting for the last vote and making a passionate argument to voters showing you are deserving?

In Hoboken, the arguments are less about the Hoboken voter and more about a cult of personality push to aid and abet a wannabe career politician. That's not in keeping with any principle of service the Founding Fathers had in mind.

MSV has articulated an independent position for instant runoffs. It needs further legislative efforts but without runoffs on the books, you can't achieve the second portion of that objective.

So on Election Day, VOTE YES on the ballot question for runoffs.