Yesterday the Jersey Journal editorial board joined MSV in calling for Hoboken voters to approve bringing back runoffs in Hoboken and hit the "YES" button.

"The Jersey Journal urges residents to vote "Yes'' and approve the measure...

The Mile Square City has already instituted cost savings by moving the municipal and school board contests from spring to the November general election. Adding a runoff provision for municipal contests may add back a few dollars, but it will ensure future mayors and council members are elected with a majority vote - at least 50 percent plus one vote...

This is a democracy. Let the majority rule in Hoboken. 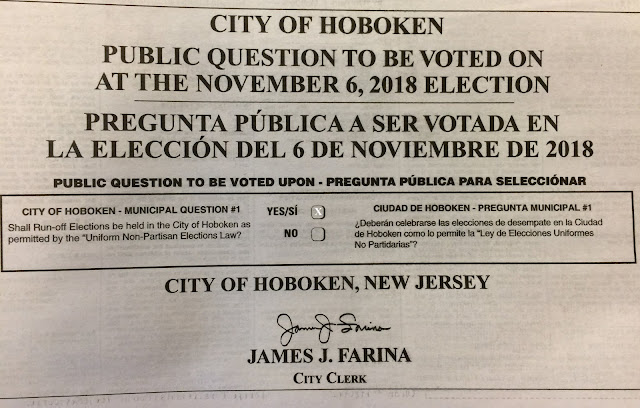 Meanwhile, the indictment on the internet pixels from the  US Attorney's Office weren't fully formed in cyberspace and Hoboken Mayor Ravi Bhalla was issuing contradictory alternative universe conclusions on voter fraud as the reason voters should not bring back runoffs.

According to the political craftsman working for Bhalla, Hoboken voter fraud being down and out with the indictments means it's more of a threat than ever.

No one on the Hoboken City Council has articulated the self-serving reality contradicting view Ravi Bhalla has but yesterday Councilwoman Tiffanie Fisher expressed her preferences pointing to the ugly mayoral campaign last year when no runoff was in place. Councilman Mike DeFusco is adamantly in favor and issued this blistering rebuke.

“This alleged vote buying scheme occurred in 2013, the first municipal election after the city stopped holding runoff elections, and it's abundantly clear that eliminating runoffs from Hoboken elections encourages misconduct.  The indictment is equally troubling because without runoff elections, it is far easier for illegal "paid for" votes to successfully impact an electorate divided into smaller voting blocs.  The indictment underscores the importance of the Referendum on the ballot Tuesday, which if passed will ensure that our City won’t be bought and sold, and rather will stand unified against entities looking to divide us for political gain.”


Talking Ed Note: In a desperate bid for personal political gain, Mayor Ravi Bhalla is attempting to use voter fraud to fear monger the Hoboken public against runoffs. Last year, Bhalla manipulated the public with searing divisive partisanship, inaccurate and fake allegations against (now former) friends and was elevated into the mayor's office under the cloud and cover of a "Terror Flyer" making Hoboken out to be a racist city.

Nothing has changed as Ravi Bhalla did zip, nada, zero to bring unity, peace and cooperation to Hoboken. After getting 32% of the vote, within a month he spit on Hoboken voters proudly announcing a second job he said wouldn't happen and followed with a declaration of war on the City Council.

Maybe Hoboken voters should let Bhalla go war with Albio Sires for that Congressional seat he really covets. In the interim, the momentum for bringing back runoffs in Hoboken grows stronger.