In a brewing controversy with exposure of a costly gas guzzling SUV "Ravimobile" exclusively pusblished on MSV last week, additional details have come to light.

The aforementioned Ravimobile was never disclosed to the Hoboken City Council as such. The 2018 Ford Expedition SUV in question ranges in cost with this one bearing a sticker cost of $63,000.

Local observers first began to notice the SUV being used to escort Mayor Ravi Bhalla's children to school uptown at Elysian Charter. This eventually led to a reader-submitted photograph of the SUV published on MSV Friday outside Hoboken City Hall. The SUV was reportedly used on a trip to Atlantic City last week by the mayor for the annual "League of Municipalities" shindig where politicos around the state come to play and hold informal discussions and meetings on various topics and rub shoulders.

The actual purpose of purchasing the Ford Expedition SUV for approximately $63,000 was never disclosed by the Bhalla Administration last summer but inserted into the resolution pack making no mention of what the SUV was for and no one from the Administration gave the actual reason for its purchase.

Late Friday, Hoboken Police Chief Ken Ferrante offered details on the usage of the vehicle outlining various ways it was deployed by the Hoboken Police Investigations Bureau for "dignitary protection, transporting special victims and families" and "the Mayor's Security Detail."

The Ford Expedition, however, came before the City Council for approval in August last summer unconnected to any request from the Hoboken Police Department. The cost was submitted in bills by the Bhalla administration and the resolution presented to the City Council seen below makes no mention of its regular use for the mayor. 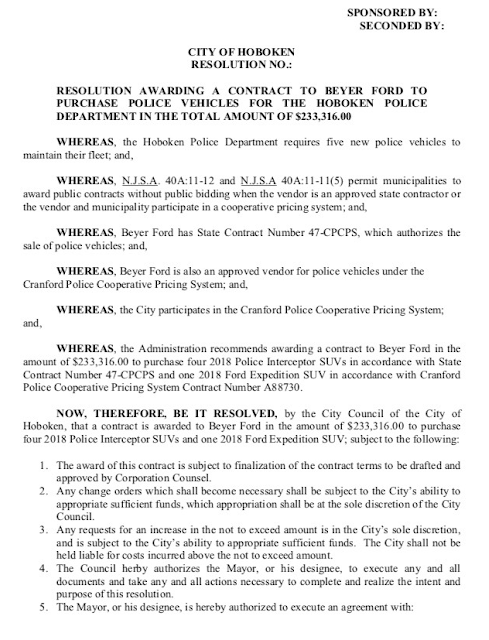 Members of the City Council were not immediately available for comment and the mayor's office typically avoids answering questions.

Talking Ed Note: While many in Hoboken will be uncomfortable questioning the basis of a vehicle for security purposes related to the mayor, other residents will be less willing to remain silent about the choice of a big expensive gas guzzler.

Former mayor Dawn Zimmer, the first Jewish mayor declined any security detail and was often seen going to meetings around the Mile Square City unescorted on her bicycle.

Senior Hoboken Police officials differed with the former mayor and point to "American national radicals" who may be triggered by a Sikh holding office. Ravi Bhalla was a highly visible City Councilman for more than eight years prior without any known threatening bias incident.

Last year a controversial Ravi Terror Flyer appeared days before Hoboken voters went to the polls. The terror flyer was highly publicized by many in the media boosting Bhalla's bid while creating a perception Hoboken is a racist bigoted town.

No evidence of any competing campaign has emerged with the Ravi Terror Flyer since and the Hoboken Police Department continues the pursuit.
Posted by SmartyJones at Monday, November 19, 2018
Purpose of 'Ravimobile' never disclosed to Hoboken City Council
2018-11-19T09:02:00-05:00
SmartyJones
Comments

Dear friends and neighbors:
I hope you can join me tomorrow – Monday – night for an important community discussion on marijuana in Hoboken.  It is at 630 pm at the Jubilee Center at 601 Jackson.

In my 10/23 email to you asking for your feedback on marijuana, I explained the specifics of the “Marijuana Ordinance” that the Administration had proposed to be heard at the November 7th City Council meeting. I wont restate everything here, but I encourage you to reread my email to find out more color on the proposed legislation.
At the meeting tomorrow night, there will be a panel comprising our State Assembly representatives including I believe Raj Mukherji, who is one of the sponsors of the State level legislation, a representative of the ACLU to discuss the social injustices of marijuana, Hoboken’s Police Chief Ken Ferrante and someone by the name of Sasha Huetz of Garden State of Mind (who I can’t find any information about although I assume she is a pro-cannabis advocate).  This is a great opportunity to ask any questions that you may have.
In response to my 10/23 email, I received almost 100 emails and messages from many of you.  I am compiling these and will send out a summary before the meeting tomorrow.  The responses range from definite no’s to definite yes’s and everywhere in between.  But based upon the feedback I received, and some of my own thoughts, here are some suggested questions for you to consider asking tomorrow night:
This is such a major change for our community and the Administration was pushing to move forward with no public meeting.  But I insisted that we have one prior to any vote.  Personally, I don’t see the rush and would prefer no vote is taken until the State level vote occurs.  Then we know what we are voting on.  But this is fluid, and we should all be trying to become as more educated as possible in the interim so I hope you will join me and other members of our local government at the meeting tomorrow night.
As always, if you have any further questions or want to discuss this or anything else, please feel free to call me at 201/208-1674 or email me at hoboken2nd@gmail.com.

Councilwoman Jen Giattino: Marijuana Use In Hoboken, Monday at 6:30

Dear friends and neighbors,
The Administration had placed an ordinance for first reading on the October 17th agenda TO AMEND AND SUPPLEMENT CHAPTERS 196 “ZONING” AND 128 “LICENSES” OF THE CITY OF HOBOKEN ESTABLISHING LAND USE REGULATIONS AND LICENSING REQUIREMENTS FOR MARIJUANA ESTABLISHMENTS.

It was removed from the agenda by Council President Ramos and me at our agenda meeting on October 11th to give both the Council and the Public the opportunity to understand what is being proposed by the Administration and get input from Hoboken residents.
The Ordinance would allow the sale of marijuana in certain areas:
I-1, I-1(W), I-2, CBD and Court Street Subdistrict.

In the proposed Ordinance:
Please attend the meeting on Monday, November 19th at the Jubilee Center, 601 Jackson Street, to be part of the discussion on what is appropriate for Hoboken with regards to the legalization of cannibas use.
Thankfully the social injustices in marijuana related arrests are being addressed by the State. The purpose of the meeting tomorrow is about if and where marijuana establishments should be located in Hoboken.
-Jen
Posted by SmartyJones at Monday, November 19, 2018
Councilwoman Jen Giattino: Marijuana Use In Hoboken, Monday at 6:30
2018-11-19T07:52:00-05:00
SmartyJones
Comments