A litany of lies and savage cringe-worthy attacks are dropping like so much sludge below sea level in the overloaded Mile Square City sewer lines.

The Martin Luther King holiday weekend was selected for delivering more fanciful lies and outrageous hate. The reason? A question at the January 2nd City Council meeting followed by other council members' questions at the next in what was dubbed PayrollGate.

Like the Jersey Journal and the Hudson County View, the news reported here highlighted the lack of an answer to a basic question raised prior to the January 2nd City Council meeting about increased salaries inside the mayor's office.

City Council President Jen Giattino inquired on the morning of January 2nd why the mayor's office, bloated as it is at $300,000 in Mayor Ravi Bhalla's first year grew larger in 2019? By way of comparison, former mayor Dawn Zimmer had one aide at $35,000 in her first year.

Seeing no truthful response from the Bhalla Administration, the Council President posed a simple question during the council meeting that evening. For asking that one question, Jen Giattino was called a bitch on the City of Hoboken Facebook page by Ravi Bhalla's paid political operative, Nancy Pincus. She runs the fanatical blog for Ravi Bhalla, coordinating directly with the mayor's office in an endless stream of filth and fabrications against the good government councilwomen Jen Giattino and Tiffanie Fisher.

The scummy attacks there make Hoboken411 look like a Pulitzer Prize-winning operation in its heyday. As a prescient revelatory paid political operative exposure previously declared, Ravi Bhalla owns it.

No answer came at the January 2nd meeting leading to additional reasonable questions at the last City Council meeting, this time by most council members. Among them: Vanessa Falco, Mike DeFusco and Peter Cunningham but only one council member is being declared one of the "bitches" at Ravi Bhalla's paid political operative blog site for merely asking questions, Councilwoman Tiffanie Fisher.

If the Hoboken public awaits any transparency from the Ravi Bhalla Administration; it's received none. Maybe the mayor, one year in office is too busy wheeling HudCo contracts to his second job at a Republican land use law firm.

How it started. The Corporation Counsel Brian Aloia and business administrator both stated on the record at the January 2nd meeting there were currently four employees - four mayoral aides on the mayor's office payroll - into 2019.

That's no fault of any question by any council member. Its' a statement of fact.

Did anyone see a Nixle alert with an explanation by Mayor Ravi Bhalla or his $300,000 army of political face punchers? Nothing but vile attacks spewed at increasing levels with zero answers to the public.

Let's examine the latest fabrications and see them quickly implode as further face punching fabrications against the Hoboken public have ensued.

Listen to what Corporation Counsel Brian Aloia said in regard to Mayor Ravi Bhalla bringing in criminal defense attorney John Lynch. He states: "Mr. Lynch was hired to do an investigation..."


Is that why a criminal defense lawyer is needed, to answer investigators?

Now listen closely to what Aloia says when the criminal attorney was hired. He delineates the exact timeline on the Bhalla Administration efforts to hire this criminal defense attorney and states it began around January 6th and was confirmed on January 8th.

Click on the video to hear that exact portion in the meeting.


Now, according to the anonymous paid political operatives connected to the Hoboken mayor's office and relayed to another confirmed Ravi Bhalla paid political operative outside it; the reason for the NJ Municipal Joint Insurance Fund (JIF) providing a criminal defense attorney out of Union City is simple. It's this website raising questions about the potential allegations over weeks surrounding the Bhalla Administration.

But the first time those questions were raised wasn't published until January 10th. And no one else asked those questions: not City Council President Jen Giattino, not Councilwoman Tiffanie Fisher and not any other council member.

Oh, the lies paid political operative liars tell when their aim is to deceive.

Further, Aloia states it was the Bhalla Administration that contacted the JIF seeking assistance of his referral for a criminal defense attorney. There's no evidence the JIF is reading Hobokenhorse.com or that questions asked by council members in the two January council meeting required their assigning a criminal defense attorney to Ravi Bhalla's office of the mayor for "an investigation."

The City Council couldn't get straight answers from the Bhalla Administration. Why would an investigation be needed in 2019 if a "separation agreement" for a former employee took place last year?

Add this to the latest litany of lies being shoveled "anonymously" at the Hoboken public. There are more tissue paper thin lies about a payroll error but if that were true, would it take months to be addressed by their paid political operative liar-on-call?

These latest lies and vilest attacks followed, calling councilwomen bitches. Because they dared to simply ask a few questions at two council meetings. Enter Ravi Bhalla adding another communications manager on the payroll in early December who ran his dirty mayoral campaign at almost $25,000 in salary more than the last.

Expect more anonymous lies, fabricated finger pointing projection and vileness spewed at the Hoboken public. The only people responsible for any of this less than transparent disaster are in the mayor's office. Take a bow Ravi. 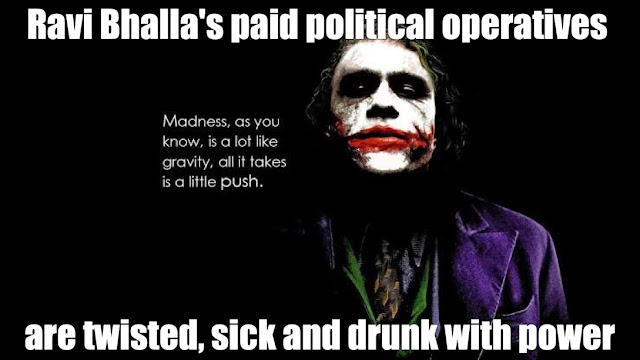 Talking Ed Note: In yet another less than transparent maneuver discovered in claims, Ravi Bhalla tried to shovel a $7,500 raise under the radar to his Chief of Staff John Allen. Upon discovery, that went over with the City Council like the Hindenburg's arrival in New Jersey. The City Council immediately reversed the less than transparent increase.

It's only January. If you thought the disgusting race-baiting attacks orchestrated out of the mayor's office against the City Council was the end of the vile behavior, think again. Hoboken will be lucky if it can make it through November and its council ward elections without the appearance of another well-timed Ravi Terror Flyer.

It was Martin Luther King Day yesterday but with Ravi Bhalla's well-paid political operatives and their unquenchable desire for unchecked power, it's strictly Macolm X's motto, "by any means necessary."
Posted by SmartyJones at Tuesday, January 22, 2019