Apparently, low information voters and low information councilmembers are fine with the ultimate act of cynicism in putting Councilman Michael Russo on the hospital board.

Yes, the same hospital he with other members of MORTe tried to kill in 2011.

Back with more but first, time to go back into the Horsey Wayback Machine. There was no better coverage on the savage battle to take down Hoboken, the hospital and then blame former mayor Dawn Zimmer.

From the archive, live coverage at the City Council meeting on September 21, 2011: SUICIDE MISSION. 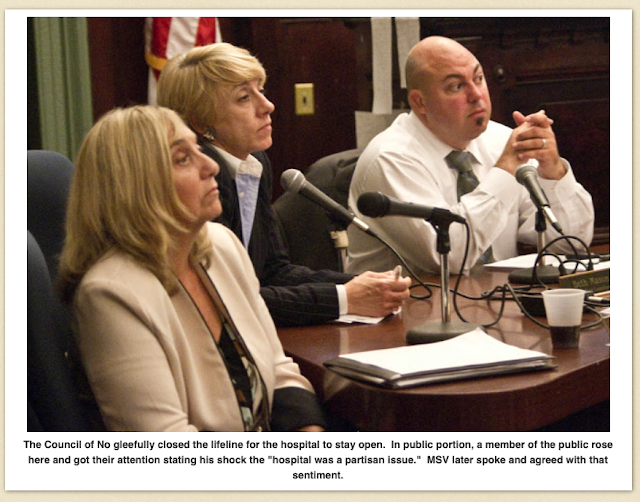 
Councilwoman Beth Mason said this bond ordinance was "throwing money away."  She said her demands also had not been met. (State regulations govern two of them and she conveniently overlooks it.) Additionally, she complains about the nurse's union who took a pay cut. She actually disparages the bondholders, re: the Hoboken taxpayers who will be made whole.

Councilman Mike Russo is attempting to point at "investigations" and there is no guarantee the creditors and unions will accept a deal tomorrow. (Better to kill it tonight one can only conclude.)

Russo in full politrickin mode is claiming to be speaking for the taxpayers. And he's being applauded by a group of Old Guard people who don't pay taxes. You can't even put a price to this level of cynicism. He calls the mayor "a grifter" and is applauded by the Old Guard rabble who are cutting their own throats.

The fix is in!

BA Arch Liston corrects the record to the assertion by Councilman Russo that the City has a $5 million surplus to utilize. Russo then goes out of control and refuses to allow others to speak.

Talking Ed Note: Councilman Jim Doyle, what the hell is wrong with you?

After Councilwoman Tiffanie Fisher nominated Peter Cunningham, the resolution sponsor Emily Jabbour announced she would abstain from voting. She said due to her involvement with the hospital on the matter. She's not precluded from voting but removed herself although there's no conflict. MSV reached out to her and is awaiting comment on the effort to have Russo appointed.

Corporation Counsel Brian Aloia interjected as a point of interest prior to the vote, the hospital, CarePoint, retains the authority to decide on any council nomination sent to them.

It would have been quite embarrassing to see the City Council put up Russo and then the hospital to respond back "NO! What are you smoking?"
Posted by SmartyJones at Thursday, February 07, 2019