City Council: on tap - more regulation on housing and more big raises in the mayor's office?

On the agenda at this evening's City Council meeting, numerous items on housing, marijuana, and talk of more big raises in the mayor's office. The last is unclear as it doesn't appear to be on the agenda per the City website.

On housing, there is this undefined "increase (for) the set-aside percentage of affordable housing units." It sounds like a new regulation beyond the 10% set-aside on new development over 10 units. Was there a study on the economic/tax impact? What has been the impact in the previous set-aside action? The resolution appears below. 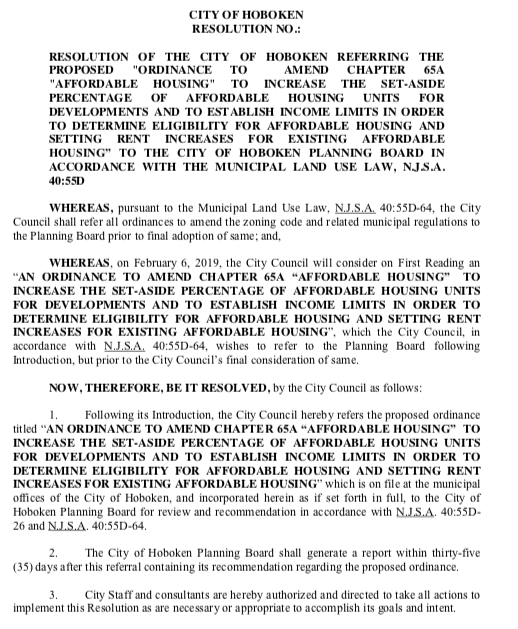 Talking Ed Note: Word of big raises once again in the mayor's office, this time for the Business Administrator and office secretary. It's not confirmed just as there's no confirmation or answers from the mayor's office that Hoboken faces a budget deficit and looming tax increase.

The mayor's office takes care of its own but keeps pretty mum these days on certain policy questions.
Posted by SmartyJones at Wednesday, March 06, 2019