Dear friends and neighbors:
This week has been intense as you may have seen if you TUNED IN to the beginning or read any of the press coverage of our City Council meeting Wednesday night.
The cause?  Parking, Taxes and Politics.
After a lot of discussion and aggravation, we ultimately:
A number of people have reached out trying to understand what the heck happened and why and how including why I voted the way I did.  And I will address this below in more detail (grab a drink...), but first, I want to give you my views on Dynamic Parking and our 2019 Budget.
DYNAMIC PARKING:
I was one of the four ‘No’ votes on the Dynamic Parking ordinance approved in November.  That said, I support raising prices for metered parking in our business districts to incentive turnover to support our businesses, just not so high and not so quickly.  Tell me what you think of just raising it to say $2 in the CBD?
I voted ‘No’ originally also because I felt there was no transparency around the use of revenues, not enough consideration of the impacts to our residents and local businesses, and no roll out plan other than a Nixle alert.
I voted ‘Yes’ on the repeal last night for reasons below but mainly because it was the better of two alternatives being considered.  I will work with everyone on a new pricing plan that supports our businesses and the city’s financial needs, and not penalize our residents.  Some additional color underpinning my view:  I work closely with our businesses as a member of our Special Improvement District steering committee and I can tell you the businesses broadly support pricing changes to affect turnover, but where they are divided is on price.  Smaller businesses feeling most impacted by higher prices.
2019 BUDGET.
I am concerned.  The Mayor’s proposed budget showed a 2.5% increase in the tax levy after depleting the City’s rainy day fund/surplus by $5M in 2018 with a real possibility of seeing this happen again in 2019.  And if that were to happen, we may have an insolvent parking utility and a low surplus that will impact our AA credit rating and ability to borrow at low rates.  Parking revenues from the Dynamic Pricing were to be a major source of putting that "borrowed" surplus back.  I am hopeful the Mayor and the Administration will come back with more cuts and a plan for parking revenues that works.

So back to the week that was… the how, when, who and why.  Like a backstory on TV when you see “24 Hours earlier”... some of this is a little inside baseball but it will give you an idea of what happened leading to the intense vote on Wednesday night…
In case you are interested, this is what the votes were... 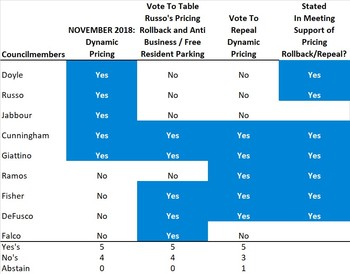 “I thank the City Council for adopting the proposal by the chair of the Council transportation sub-committee, Michael Russo, and my office to roll back the dynamic parking policies in Hoboken.  The feedback from the public has been valuable as we pause to identify the best ways to help improve parking for residents, visitors and business employees alike.  We look forward to working with the community as we develop parking policies that are fair and increase turnover.  I ask the Council to finalize the adoption of this proposal at the next Council meeting on second reading.”
Since sent to thousands of residents in Hoboken, it has now been removed from the City's website but remains on the Nixle site. 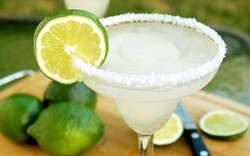 What’s next?  A margarita, some sleep and then round two next week.  But seriously, the Mayor has called a special meeting to re-introduce his budget on Wednesday, March 27th at 6pm.  I am hopeful the next version will be one that the City Council will feel is sustainable and vote 'Yes' to introduce.  And we will begin budget hearings as soon after the Council introduces the budget.  Regarding parking?  We will vote on the second reading of the repeal at the council meeting on April 3rd.
NIXLEGATE 2.
If you are as bothered as you know I am about the use of Nixle by the mayor’s office for political purposes, please email the Mayor and tell him and cc: me and other council members.  It wasn’t just the two Nixle’s referenced above, it was also the NIXLE SENT TODAY about the Northwest Park and Union Dry Dock.  No real update other than some promotion for the Mayor.  If any of you are interested in starting an online petition about this… I certainly wouldn’t oppose…

Remember, Nixle told the City that Nixle CANNOT BE USED FOR POLITICAL PURPOSES and said they would get more involved if the problem was “systemic.”  So let's keep track together.

As always please forward this to anyone you think may be interested and feel free to reach out via email, text or phone (201-208-1674) about this or anything else important to you.
Best wishes,